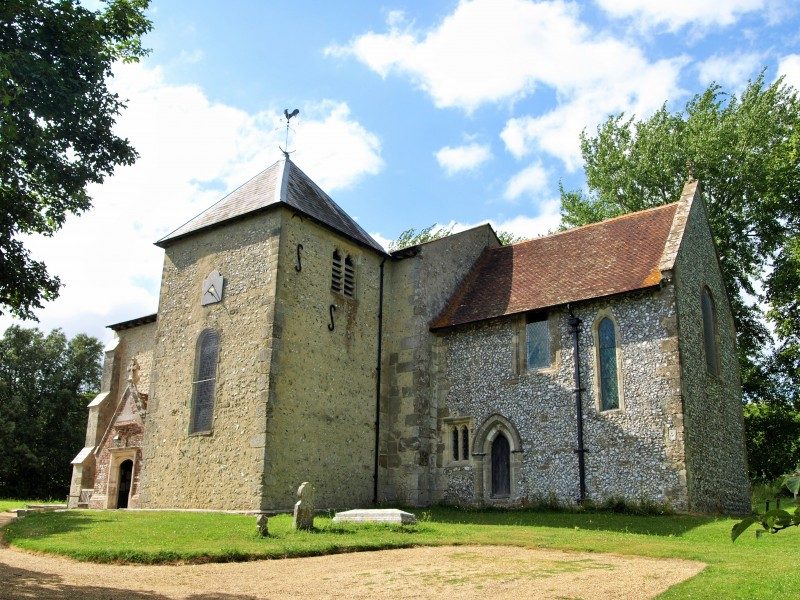 The church of St Mary at Stoughton is an excellent example of a Saxon cruciform church which has remained intact and without major alterations or extensions except the addition, in the 14th century, of a belfry over the south porticus thereby converting it into a tower. There were of course the usual window and door replacements in the 12th and 13th centuries.
There is no true crossing at St Mary’s, the transepts being set short of the chancel, and being more properly called porticus(es). This was a typical Saxon layout which left the external corners of the nave separate from the chancel walls. All four corners of St Mary’s nave have Saxon ‘long and short’ quoin masonry.
The chancel arch is very early Norman, probably dating from c1070. The arch head has two orders with heavy roll mouldings and the soffit has a similar moulding. The responds have triple attached shafts on three-ring bases. The chancel itself dates from c1200, and may well have replaced an earlier apse.
The east window has a round head and rere-arch dating it to c1200 along with the chancel. The glass dates from 1877 and depicts the Ascension. Behind the altar there is a fine three panel reredos made of marble, dating from 1879.
The south porticus which was converted to a tower in the 14th century. The massive timbers support the bell chamber or belfry which originally
housed three bells. This was increased to five at the end of the 20th century necessitating installation of a steel sub-frame to support the existing oak frame.
Behind the porticus screen is the south porticus south lancet window, which has stained glass by Hardman dating from 1876 and depicting the Good Shepherd.

The font dates from the late 12th century. The square bowl is supported on a central stem with four smaller corner shafts. It is carved on three sides with arcading, and on the fourth with a possible representation of the Tree of Life.