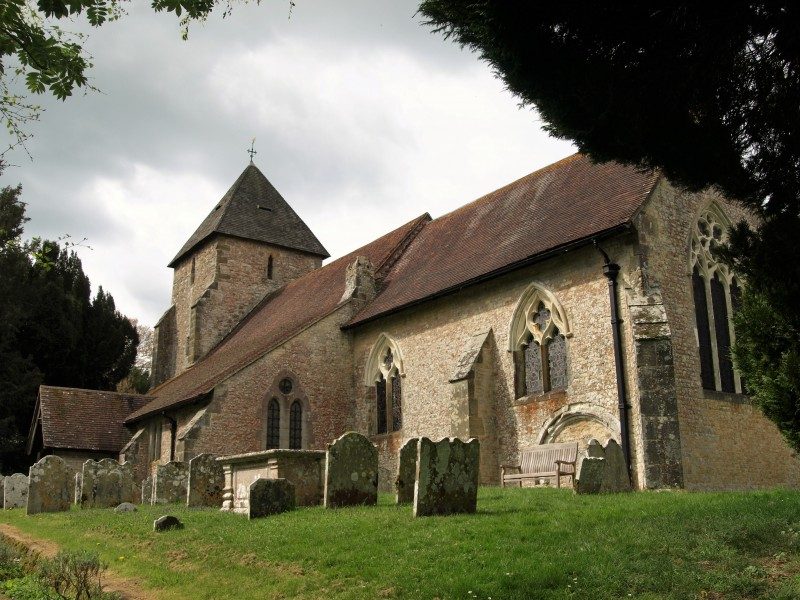 Parts of the nave indicate that the church of St John the Baptist has its origins in the 11th century. Whilst herringbone masonry in the north wall of the nave may not be a reliable indication of date, the arches and piers of the south arcade are Norman Transitional dating from c1200, and were cut into an earlier south nave wall, which must therefore have been 11th century, probably early Norman.
Sutton Church consists of this 11th century nave, a south aisle, north transept, two stage west tower, chancel and south porch. The tower dates from c1300, and the chancel and north transept from c1320-1340.
The first picture in the gallery above shows the south porch and west tower. The tower is strengthened by angle buttresses and has a shingled pyramidal roof. The tiny 1-light trefoil headed bell openings are consistent with a c1300 dating.
The second photograph is of an interesting external tomb recess in the south wall of the chancel. There is no longer a tomb in the recess to assist with dating, but the inner orders of the arch appear to be contemporary with the original build. The stonework in the back of the recess has been renewed, and there is now a memorial bench to the Rev Bill Elliot and his wife in front of the tomb recess.
Next shown is a general view of the nave, the chancel arch and easternmost arches of the south aisle and north transept, and the chancel itself. The king post roof of the nave is also showing. The east window has been renewed in Decorated style and was fitted with stained glass in 1878. Depictions include the Crucifixion and the Angel and Zacharias, father  of St John the Baptist to whom the church is dedicated.
The fourth photograph is a view of the north transept from the nave. The north wall has a 2-light Decorated window at normal level, with another 2-light window above, inserted at a later date. In the east wall of the transept is a 2-light, cinquefoil top window under a square head.
The next two photographs are of some beautiful stained glass in the chancel south and north walls. Firstly, above a triple sedilla and piscina in the south wall is a 2-light trefoil headed window with glass, installed in 1879, depicting St Mark and Jeremiah. The chancel north wall window shown is the easternmost one of two, and the glass depicts Ezekiel and St Luke. It was also installed in 1879 by Clayton and Ball.
The final picture is of the octagonal font which probably dates from the early 13th century. The octagonal lead lined bowl is carved with arcading, two arches to each face, and is supported on a central shaft and eight (Sussex marble) corner columnettes. The whole is mounted on a circular plinth.