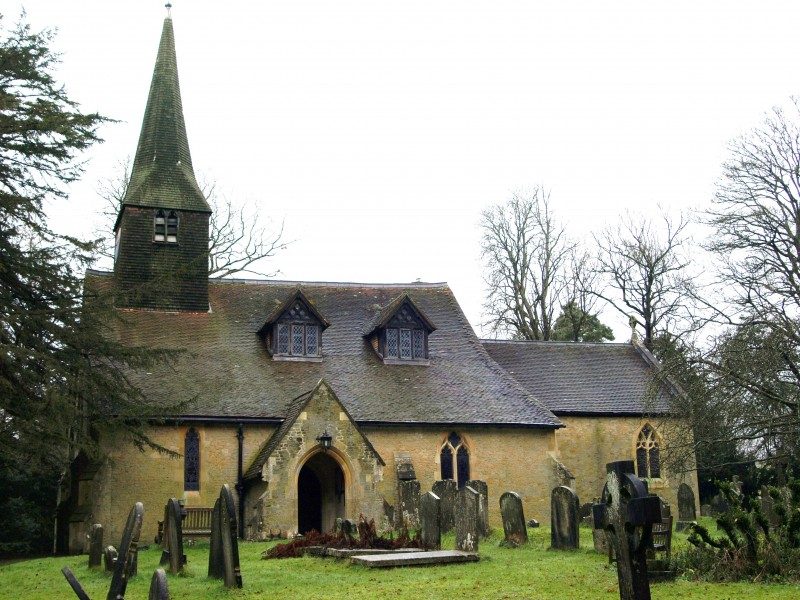 Standing on a hill overlooking the Weald and with the second largest yew tree in the country in the churchyard, St Peter’s church now has an outward Victorian appearance, but as with many such churches, it probably sits on the site of a former Anglo-Saxon church, of which there is now no evidence.
The oldest extant parts of St Peter’s, an early Norman priest’s door and window are shown in the gallery below, second and third photographs. These date from the last part of the 11th century and were originally in the external north wall of the chancel. The door now leads into the vestry, a later addition.
The first picture in the gallery shows the 14th century chancel viewed from the nave. The white painted iron rood screen with twisted standards and decorative scroll work is 19th century. The reredos dates from the same period, having been designed by the Victorian architect, Sir George Gilbert Scott, who also designed the reredoses at Westminster Abbey and Lichfield Cathedral.
The stained glass in the Decorated Gothic east window is Victorian, as is most of the stained glass in St Peter’s. It depicts the Crucifixion and was installed in 1866. The centre carving of the reredos shows Christ carrying the cross to Calvary. A closer view is shown below.
The second picture in the gallery above shows the chancel arch wall paintings which date from 1903, and are in memory of a former vicar.
The four huge oak posts with uneven cross bracing, shown in the gallery (third photograph), support the bell turret, clock chamber, and  shingled spire, at the west end of St Peter’s nave. Along with the nave roof beams and braces, the timber work probably dates from c1300.
Finally, the modern square font is of white stone on a central shaft with green compound marble corner pillars.