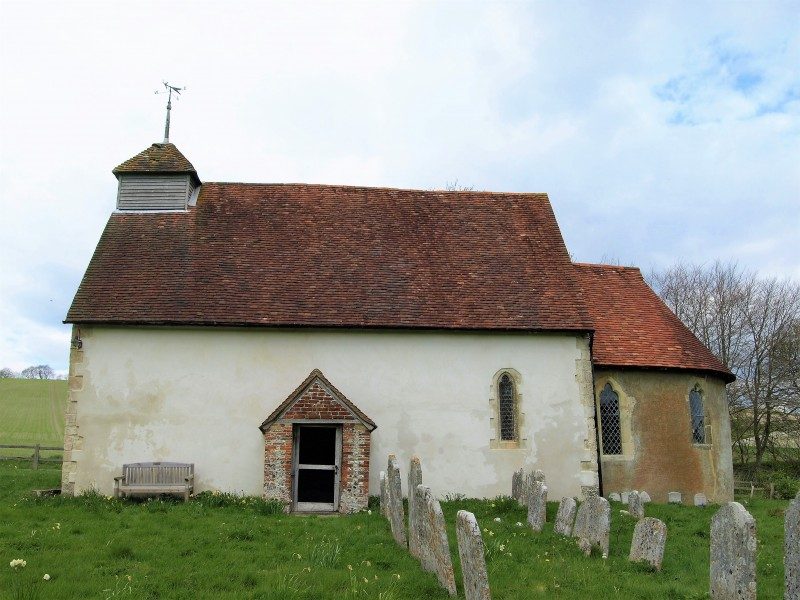 The church of St Mary the Virgin at Upwaltham was built by the Normans early in the 12th century, perhaps c1120, and has been little altered since. A south porch was added after the south doorway was rebuilt in the 14th century, and has been renewed at least once since, the last time in the 19th century. Apart from this there are only the usual fenestration changes, and other necessary renovations.
The first picture in the gallery above is of St Mary’s from the south. Showing are the apsidal chancel with 14th century low-side lancet window, the Victorian brick and flint built porch, and the weather-boarded bellcote which may not be the original.
Next shown is an internal view of the chancel. Unusually, there is no east window, and the north and south windows either side of the altar are 15th century. There is a single tie beam with king post.
The third photograph shows one of three tie beams with king posts in the nave. It also shows the pointed chancel arch in Early English style, dating from the first part of the 13th century. Prior to this, the original chancel arch would have been round, in Norman style.
Next in the gallery is a view looking west along the nave which is narrow with tall walls. Both Saxon and Norman churches were built with narrow, tall walls, but the thickness of the masonry at St Mary’s, at 3 feet, indicates that this was a Norman build. The 2-light west window is Victorian in gothic style, with stained glass installed in 2005 showing local flora and fauna.
The fifth photograph is of the plain Norman ‘tub’ font which is set on a modern base.
The last photograph is of the lancet window at the east end of the nave south wall. The stained glass dates from 1866 and contains quarries and IHC monograms. (IHC is a combination of letters forming an abbreviation for the name of Jesus Christ).

One thought on “Upwaltham Church”