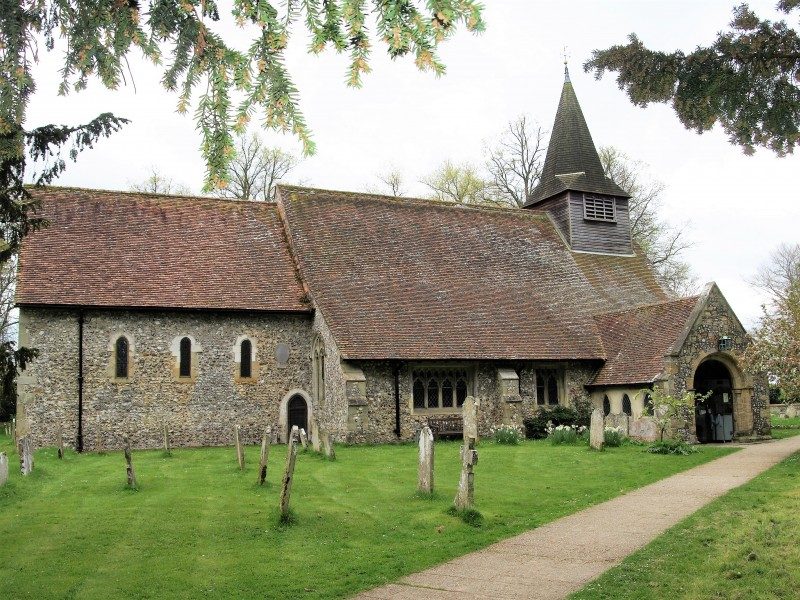 The church of St Mary the Virgin at Walberton was built pre-Conquest and was recorded in the Domesday Survey of 1086. Very little remains of the original Saxon building, but pre-Norman masonry, with reused Roman materials, can be seen around the west doorway. During the 12th century the north and south aisles were added. This work possibly continued into the next century, all of the arcade columns and arches being in different styles, suggesting that they were constructed over an extended period. Also in the 13th century, the chancel was rebuilt, and a north porch was added.
The main picture above was taken from the north-east approach to St Mary’s. Showing are; the lancet windows and priest’s door in the chancel, the unusual north porch, also with lancet windows, and the timber boarded belfry with shingle clad broach spire.
The first picture in the gallery above shows the east end of the church. The chancel arch was rebuilt in the 14th century. The three east lancets in the chancel are contemporary with the rebuilding of the chancel in the 13th century. The stained glass in these windows was installed in 1865 and depicts:-
In the left window; Temptation, Baptism, Annunciation.
In the centre window; Ascension, Crucifixion, Nativity.
In the right window; Doubting Thomas, Walk to Emmaus, Christ and disciples.
The second photograph is of the nave looking west. The nave roof was renewed in the 15th century, and was altered again during restorations in 1903. To the left (south) and right are the 7 unequal arches forming the north and south arcades. Next is another view of the nave, showing the oak pews, and the bell-ringers platform which is accessed from a staircase to the north.  This platform was possibly formerly a musicians’ gallery, but the 1903 church reordering  was so extensive that this is difficult to be sure of.
The fourth photograph shows 3 of the arches of the south arcade. The 4-light window with cinquefoil heads seen through the easternmost arch is the Woolton memorial window. The stained glass, installed in 1968, includes the Woolton arms and British Red Cross badge of honour, along with other subjects relevant to the time of World War 2 when Lord Woolton was a Cabinet minister, and also his education at Manchester.
The first picture in the second gallery is of the 13th century north porch. The large size and the position on the north side of the building make the porch a rare addition to the church. There are 3 lancet windows on each side, and plate glass double doors were fitted at the end of the 20th century. Next shown is the Saxon tub font, which was returned to the church at the time of the 1903 restoration having been discovered 40 years earlier in a local farm.
The third picture is of the 13th century piscina, and the fourth is of 2 reliquary niches in the chancel east wall behind the altar. These niches would have originally held reliquary boxes containing the physical remains of holy persons at the time of the Crusades.