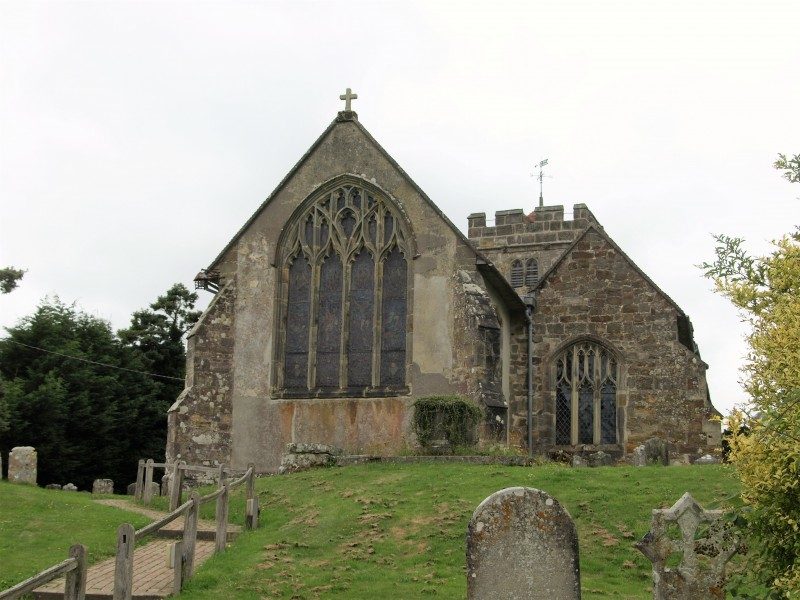 The church of St Mary the Virgin at Warbleton is built on a Neolithic burial mound and likely replaced earlier religious buildings on the site. The nave and chancel date from the 13th century when they were constructed of sandstone rubble. The south wall of the chancel has unusual ‘wave pattern’ external rendering not dissimilar to artex patterning on ceilings, popular in the 20th century. In the 14th century a north aisle and south porch were added, with the west tower following in the 15th century.
Warbleton is known as the home parish of one Richard Woodman who was a churchwarden and Ironmaster in the mid 16th century. During her reign (1553 – 1558) Mary I of England, daughter of catholic Catherine of Aragon, instructed the Church to change back from protestant to catholic. This led to objections from the clergy, including Richard Woodman, and subsequent trials and executions. After being imprisoned in Warbleton church tower, Richard was burned at the stake in front of the Star Inn at Lewes on June 22nd 1557, along with nine other martyrs.
The first photograph in the gallery below shows the north elevation of the church with typical Decorated Gothic style windows in the nave. They are double lights having cinquefoil heads in ogee arches, with trefoil lights over. In the 19th century the north west vestry was added, built to match in sandstone with similar style window.
The second photograph shows part of the south wall of the chancel with patterned rendering, a priest’s door and two 13th century lancet windows, the westernmost of which has had a later trefoil headed window inserted in the bottom half.
Next shown is a canopied tomb recess which was built into the eastern end of the south chancel wall contemporary with construction of the chancel, or soon after.
The fourth picture in the gallery is of the top stage of the 15th century tower, and shows one of the paired bell openings with wooden louvres and some of the grotesque water spouts. The fifth photograph shows the four stage, crenelated tower from the south west. The octagonal corner turret, west door and large Perpendicular Gothic style west window in the second stage, are showing in the photograph.
The last photograph in this gallery is of the disused north doorway in the nave.
The first photograph in the second gallery is of the nave and north arcade looking towards the chancel. The nave roof is vaulted in six bays. The second photograph shows the 13th century circular font, and next is the 14th century iron-banded parish chest, which stands next to one of the north aisle columns. The fourth photograph shows one of a total of four piscinae in St Mary’s. The glass top cabinet in front of the piscina contains the Book of Remembrance.
Shown next is the chancel 4-light east window. The stained glass depicts events in the life of Christ, from left to right, The Agony (in the Garden of Gethsemane), The Crucifixion, The Deposition (the taking down from the cross), and The Entombment.
The sixth photograph shows the eastern half of the south chancel wall. There is a single sedile, a piscina, and above this a 2-light Decorated style window with stained glass, installed in 1930, which depicts The Ascension, and Pentecost.
The seventh picture in the second gallery is of one of the two original lancet windows in the chancel south wall. Next shown is the other lancet which has had a later trefoil headed window inserted into the lower half. Whether this is an example of the enigmatic ‘low side’ window, perhaps for use in administering holy Communion to, and/or hearing Confession from, persons with infectious diseases, is open to question.
The next photograph is of a brass tomb cover in the floor towards the sanctuary step. Surrounding the figure of a priest under an ogee canopy, are inscriptions in Old English. A translation mounted in a frame on the wall indicates that the priest commemorated by the brass is one William Prestwick, who was Dean of St Mary’s College, Hastings. He died in 1436.
The last row of photographs starts with a view of the south east part of the nave. In the wall behind the octagonal pulpit are a piscina and a larger arched opening which was probably for access to the rood stairs. Next is the unusual  large squire’s pew which is mounted on high square posts in the north aisle. It is accessed by a wide staircase from the aisle. The pew dates from 1722.
Finally, the photograph shows fragments of original ancient glass which have been reset in the east window of the north chapel.
.