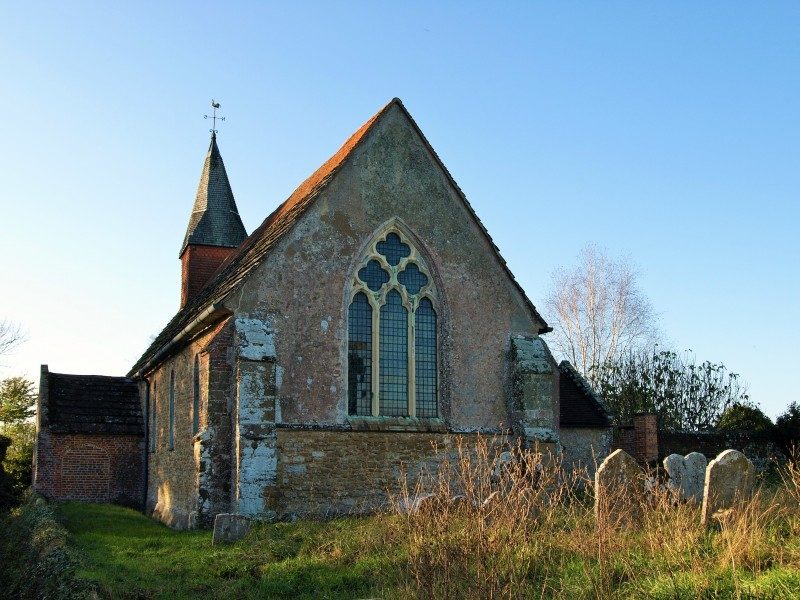 Church of the Holy Sepulchre

Warminghurst church was declared redundant in 1980, after a period of 135 years with no resident clergy and very little use. It was then vested in the care of The Churches Conservation Trust.
Dendrochronology (tree-ring) dating indicates that the bell-frame dates from 1158, although much of the church is thought to have been rebuilt c1220.
The main photograph above shows the Church of the Holy Sepulchre from the east. The church underwent extensive repairs in the 18th century, started in 1707 by James Butler, patron of the living (the church benefice) and owner of the Warminghurst estate at the time.
The first picture in the gallery shows the nave, separated from the chancel with an early 18th century pine screen. Above the three arch screen are the Royal Arms of Queen Anne.  The Arms were first painted soon after the 1707 Act of Union between England and Scotland, and were repainted in 1845. The pine box pews were installed c1770. Those with doors were rented by more well-to-do families, whilst the pews without doors were free for ordinary parishioners.
A closer view of the screen is shown in the second photograph, and the third picture shows the three-decker pulpit, with minister’s and clerk’s  stalls below. It was also installed c1770.

Above, in the gallery, the first picture shows a good example of a four-centred arch (also called a Tudor arch, or a depressed arch because of its ‘squashed’ appearance). This is the doorway into the north vestry which was formerly the burial chapel of Henry Shelley, ancestor of the poet Percy Bysshe Shelley. The burial chamber was built by 1619 and the doorway into it from inside the church also dates to the early 17th century. The worn nature of the doorway step and sides suggest that it had been used previously for some considerable time, and could, perhaps, have been transferred from Warminghurst Place when that was demolished in 1707. The external doorway to the chapel and the lancet window are also from the early 17th century.

Next shown is a brass on the north wall of the chancel commemorating Edward Shelly (d. 1554), and his wife, Joan, shown kneeling in prayer, with their seven sons and three daughters behind them. Missing from the brass, with only their outlines showing are depictions of the Holy Trinity, and the head of the son on the far left, Edward Shelley Junior. Both are the result of anti-catholic feeling during the reign of the protestant queen Elizabeth I. Representations of the Holy Trinity were discouraged by the Queen, and Edward junior was executed in 1588 for harbouring a catholic priest, hence the apparent defacing of the monument.

The last photograph is of a 15th or 16th century iron chest, which stands in the nave near the font. The locking mechanism is extremely elaborate.