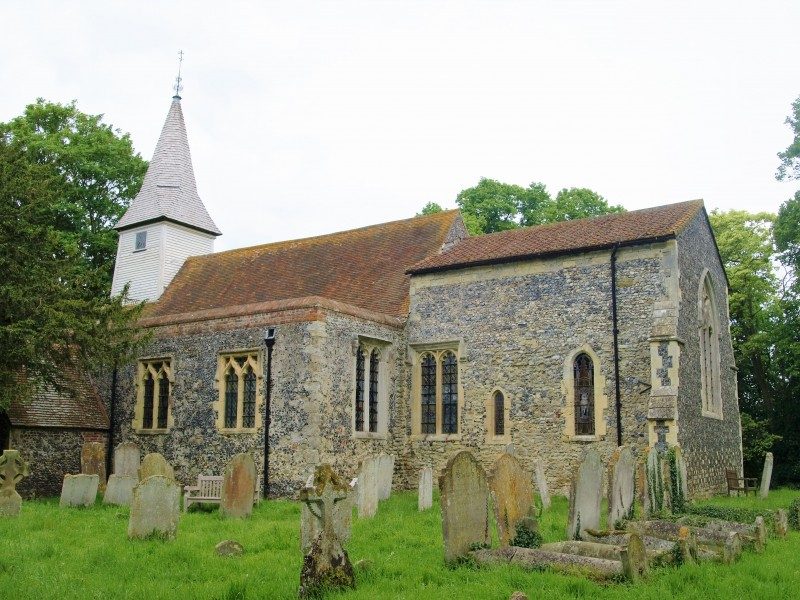 All Saints is a redundant Grade I listed building now under the care of the Churches Conservation Trust. The church is set near the end of a long country lane, close to the confluence of the Great Stour and Little Stour rivers which once flowed into the Wantsum here. The latter was, at one time, a sea channel up to 3 miles wide, rendering Thanet a true island.
The Roman forts of Reculver and Richborough stood at each end of the Wantsum Channel and the River Stour gave access to Canterbury, making this an important location from Roman times. The main fabric of All Saints is indeed Saxon, and re-used Roman bricks can be see in the nave wall.
Salvaged Roman bricks in the flint and rubble ragstone walls are shown in the first gallery photograh.
The porch was added in the 15th century.
Picture three is of the south nave arcade which dates from c1200. The fine carving to the capitals is thought to have been carried out by French stonemasons travelling back to France after working at Canterbury on the cathedral.
Above is a view from the nave looking towards the chancel. The Decorated style east window is 14th century and was reused when the east wall of the chancel was rebuilt in the 19th century.
Apart from one blocked Saxon window, high in the north-west corner of the nave, the windows at All Saints are of 14th and 15th century date, but several are worthy of note:
Below left: The 2 lancet south window in the chancel incorporates some pieces of 15th century coloured glass.
Below centre: One of 3 two-light ogee headed 14th century windows in the south aisle, this one with some beautiful stained glass depicting St Thomas and St Philippus.
Below right: A splayed lancet window in the south-east corner of the chancel, with glass depicting St Peter.

Above left: Set in the chancel floor is this 15th century memorial brass to a former rector, Thomas Mareys, who died in 1472. Next to the brass in the chancel floor are a pair of ledger slabs, the one on the right inscribed with interesting detail of the life of one Thomas Blake.

The octagonal font is probably Victorian or perhaps was from an earlier period, and was re-cut in Victorian times.