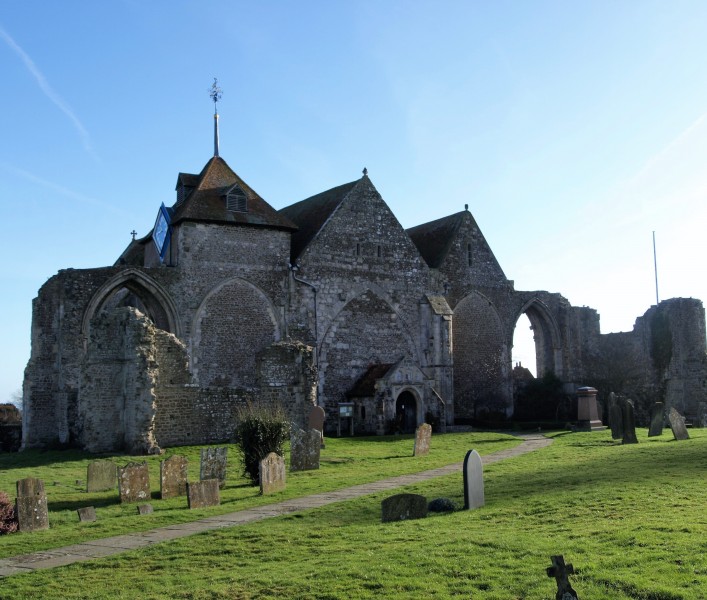 The Church of St Thomas the Martyr

The second half of the 13th century saw a series of violent storms which radically altered the English Channel coast east of Hastings. In 1250, the Cinque Port of Old Winchelsea, which at the time was the third largest port in England with a natural harbour to the north of Iham hill, was flooded at high tide in a severe storm. This was a portent of worse weather events to come, and was taken so seriously by King Henry III and his son Edward that they planned to safeguard their route to the King’s territories in France by construction of a new town up on Iham hill, above the harbour. His foresight proved crucial when, in 1287, the severe weather events culminated in the Great Storm which destroyed Old Winchelsea, flooded the Romney and Walland Marshes and changed the course of the River Rother to Rye from Romney.
By the time of the Great Storm, Edward had succeeded his father to the throne, becoming Edward I of England, Lord of Ireland and the Duke of Aquitaine. The King modelled the new town at Winchelsea on the bastide towns of Aquitaine in south-west France. Thus the streets were laid out in a gridiron pattern, with the central area being reserved for the church. At Winchelsea, the church was designed to reflect the importance of the town, and was built with cathedral-like size and style.
Construction of the church of St Thomas the Martyr was commenced c1288. with the first recorded vicar being Adam of Agmondesham in 1294. The building planned was much larger than that which remains now, although it is not clear whether the whole structure was ever completed. The present church consists of the original decorated style chancel and north chapel, but now missing are the planned nave, which would have extended as far as the western end of the churchyard, and the north and south transepts and tower forming a cruciform plan.
Amongst the many fascinating and beautiful things to see at Winchelsea church, the stained glass windows rank highly. Some of these, for which the church is famous, are shown in the first gallery below.
The first photograph is of the (north) Lady Chapel 5-light east window. The window is one of nine with stained glass by Douglas Strachan installed between 1929 and 1933. Showing below the window, above and behind the altar is a fine reredos, with figures carved in ‘blue’ Hornton stone from Oxfordshire. From left to right, the images are of St George, St Martin, The Crucifixion, St Andrew and St Alban.
The second picture shows the sanctuary and main 5-light east window. The stained glass is again by Douglas Strachan, this one being installed in 1931 and depicting ‘Praise and Resurrection’.
The third photograph is of the south wall of the chancel, showing the triple sedilia and attached piscina. Above these is a 2-light window with stained glass (not by Strachan) installed in 1878 depicting the ‘Sacrifice of Isaac’.
The fourth photograph above shows the south wall of the south aisle where there are two tombs of exceptional quality. The one shown is the left of the two, and is thought to be the tomb of Gervase Alard (d.1310), first mayor of Winchelsea, and appointed Admiral of the Western Fleet by King Edward I. Above the tomb is a 3-light window, another of those with stained glass by Douglas Strachan. This one was glazed in 1929 and shows, from left to right, St Nicholas, ‘Christ stills the Tempest’, and St Augustine.
Next in the gallery is the beautiful 5-light east window of the south aisle/ Alard chapel. The Strachan glass, installed in 1931, depicts The Baptism in the left-hand light, The Crucifixion in the second, third and fourth lights, and ‘Christ mocked and crowned with thorns’ in the right-hand light.
The last photograph in the first gallery is a view from the south aisle across to the chancel.
The first photograph in the second gallery shows two of the three tombs on the north aisle wall. These were once thought to have been moved here from the Old Winchelsea church, but are now considered to be contemporary with the south aisle tombs, ie early 14th century. Above the tombs are three windows with a superb series of stained glass by Douglas Strachan, installed in 1933. The stained glass is dedicated to the memory of the men of Rye and Winchelsea fallen on land, sea and air, in the Great War of 1914-1918. The westernmost window is entitled ‘Land’, the centre one, top right in the photograph is ‘Air and Fire’, and the third is ‘Sea’.
The next photograph is of paintings displayed on the northern blocked arch of the west wall. They are copies of Rubens paintings made in the 19th century by Belgian artist Edward Farasyn, head of the Antwerp academy. The top picture is of ‘The Adoration of the Magi’, and the lower triptych has ‘The Descent from the Cross’ as the centre panel, with side panels (which were added to the original in Antwerp Cathedral after 2 years) depicting ‘The Presentation of Jesus at the Temple’.
The third photograph shows the 19th century octagonal font. The carved oak cover dates from 1952 and features the figures of four saints – St Giles, St Nicholas, St Leonard and St Thomas of Canterbury.
Next is a photograph of a beautiful large statue of the Madonna and Child. It is thought to be continental, dating from the 17th century, and stands against the north wall on a fine carved oak stand with tester. The fifth picture shows a wall plaque with copies of the signatures of royal visitors taken from a page in the church visitors’ book.
The last picture is of the headstone of Spike Milligan’s grave in the churchyard of St Thomas’s. Following an agreement with the Diocese of Chichester, the epitaph of the Irish-English comedian is written in Gaelic: ‘Duirt me leat go raibh me breoite’ which translates to a typical  quip by the comedian: ‘I told you I was ill’.
.