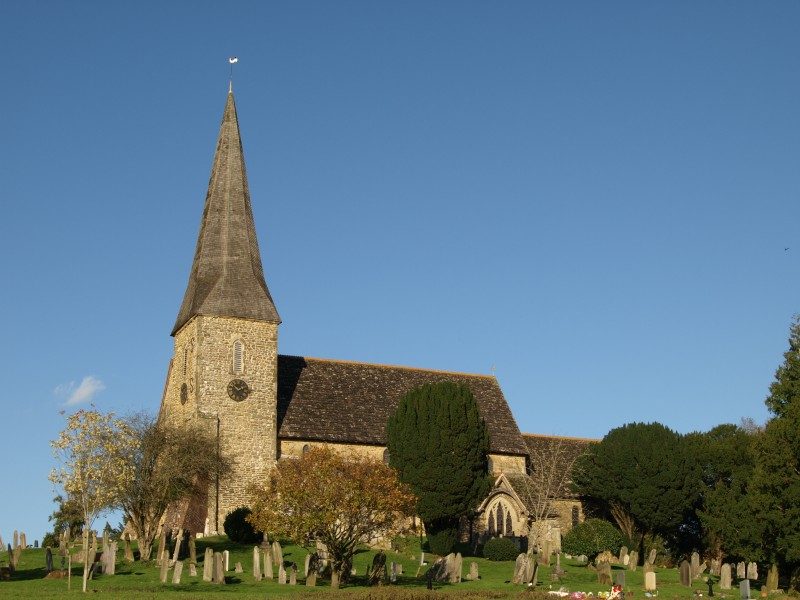 Wisborough Green parish church stands on a hilltop overlooking the upper reaches of the River Arun and its tributary, the River Kird. This, taken together with the 4’6” thick tower walls, suggest that the church was once at least in part, a fortified building guarding the navigable river route up to the Weald forest, and providing a safe haven for local people. It was not uncommon in Norman times for churches to have this dual purpose.
The oldest surviving part of St Peter ad Vincula is in fact the west wall of the tower, which is early 12th century with Norman windows and a small easily defended west doorway.

The first picture in the gallery shows herringbone masonry in the tower west wall.

Next is a photograph of the nave looking west, showing three high level Norman windows, a central dividing wall added in the 14th century, with door to the tower on the left, and organ on the right. The third picture shows one of the Norman windows.
The first photograph in this gallery is of the font which dates from the 13th century. The unusual square bowl, which is made from limestone, curves inwards to a thick central supporting column. There are four corner colonettes which are made of marble and appear to be a later renewal.
The second photograph is of the medieval murals, which date from the late 12th century, painted on a recess to the right of the chancel arch. The paintings were partly obliterated when the chancel arch was widened and the recesses on either side of it infilled, but the murals were restored in 1867 and again in 1985. The top picture is of St James the Great seen presenting pilgrims to Christ. Some of the mural has been lost, but Christ’s head with a cruciform halo is visible at the top left corner. The lower painting is of the crucifixion and has, unusually, Christ on a common cross bar with one of the two thieves. A Roman soldier is offering something, possibly vinegar, to Christ. St John the Evangelist is standing next to the soldier. The missing section of the mural would have depicted the other thief, and probably Mary, mother of Christ.
Next is a view towards the chancel from the nave. The chancel was added in the 13th century, witnessed by the Early English architectural style. The three lancet east window is glazed with Victorian stained glass, which was fitted in 1877 and depicts The Annunciation, The Nativity, and The Ascension.
The fourth picture is of the altar table which is the original stone one and was hidden at the time of the Reformation to avoid its destruction. It was reset in the chancel in 1937.
The next picture shows the Wisborough Tapestry. This three panel tapestry hangs in the north aisle. It was worked by local people over eight years from 1977, and depicts aspects of Wisborough history and life. The three sections relate to the west, centre and east areas of the village in roundels supported on climbing plants (ivy, honeysuckle and bindweed). The border features local flora and fauna.
Lastly, there is a photograph of St Peter Ad Vincula from the north. The four Norman clerestory windows can be seen above the north aisle roof.
.