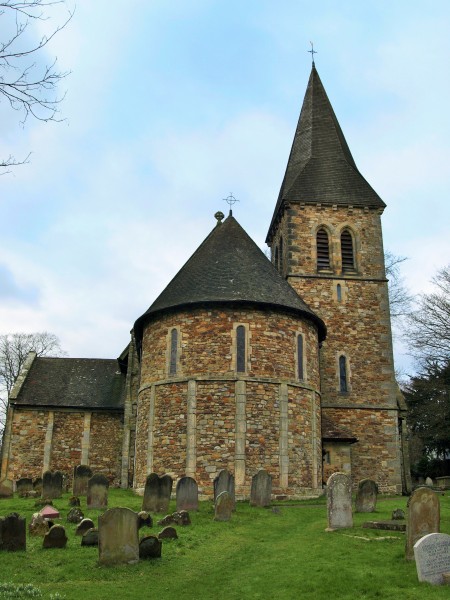 The Parish Church of St Nicholas at Worth, near Crawley, sits on pre-conquest foundations and retains some fine examples of Saxon architecture. The English cruciform building dates from between AD 870 and 925, and includes a Saxon apsidal chancel, Saxon windows and doorway rere-arches, and a massive Saxon chancel arch. The cruciform plan is formed with north and south porticus, similar to transepts, but built short of the east end of the nave. There is no crossing, the tower having been added on the north side in 1871
The main photograph above is of St Nicholas’ from the east showing the Saxon apse and Victorian broached spire.
The first photograph in the gallery below is of the church from the south showing the south porticus, and the 19th century porch. Above the porch is a double Saxon window.
The second picture in the gallery shows the chancel at St Nicholas’. The Saxon chancel arch is the largest in the country. Dating from the mid 11th century, it is 22’ high by 14’ wide. The arches leading from the nave to the two porticus are of the same date.
The third photograph is a view from just inside the north porticus across to the south one.

The first photograph in the gallery above shows two double Saxon windows above the string course in the north wall of the nave. The arched heads have through stones, and the central pilaster has a large square base and capital . The tall blocked Saxon north doorway can be made out in the external masonry. The next photograph shows the north nave wall from inside. The height and narrowness of the Saxon rere-arch is very clear. The crucifix in the arch is 18th century and of Spanish origin.
The third picture is of the interior of the apsidal chancel, parts of which were rebuilt in the 19th century, during Victorian restorations. The lancet windows at the east end are good reproductions. The chandeliers are 17th century, and, shown in the fourth photograph, there are a 15th century piscina with a trefoil head, and a sedilia dating from c1500, both on the chancel south wall.

Next shown is the octagonal pulpit which dates from 1577. It has five finely carved panels depicting in order: St Matthew; St Mark; Christ our Lord; St Luke; and St John.
The last picture is of the carved oak lectern. It is late Victorian and was given in memory of a former vicar, Rev’d G.W. Banks.