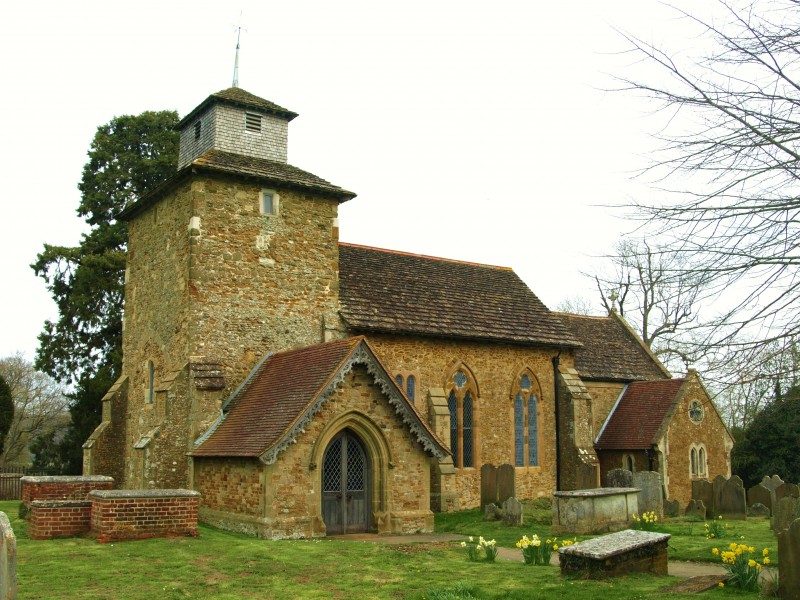 Church of St John the Evangelist

Parts of St John the Evangelist Church, Wotton, date from the second half of the 11th century. The tower and sections of the nave date from this time, the blocked round arch in the tower west wall, seen in the first gallery picture, is typically  Saxon or very early Norman.
Excavations in 1975 revealed foundations, extending westwards from the tower in line with the two modern buttresses, of an even earlier church building with mortared walls and a chalk floor.
The main photograph above is of St John’s viewed from the south, showing different roof coverings on parts of the church built at different times. The main roofs are of Horsham stone slates, whilst the porch which was built in 1857 to replace a previous timber porch, and the vestry to the south of the chancel, also mid 19th century, are covered with plain tiles. The bellcote has timber shingle tiles and a lead covered spike finial.
The second picture in the gallery shows the inner south doorway, inserted in the 11th century nave wall during the late 12th or early 13th century. The arch is constructed of alternating green firestone and clunch (chalky limestone rock), and is famous for the minutely carved heads on the inner order (lower ring of stones). The lowest carving on either side are modern repairs, whilst the other six are original and, from the second lowest on the left going clockwise, represent a pilgrim, queen, nobleman, priest, king and pope.
The third photograph shows the view towards the chancel from the nave. The high chancel arch dates from the mid 19th century when it was built to replace the smaller original 13th century arch, at the time the chancel and adjoining Lady Chapel were built.
The east windows are modern, replacing the three original lancets, built at the same time as those in the Lady Chapel which remain.
The Lady Chapel became the Evelyn Chapel in the late 16th century. It contains some interesting Evelyn family monuments, and a marble font probably dating from the early 17th century and used for the baptism of John Evelyn (1620 – 1706) a celebrated English writer, gardener and diarist who was born in Wotton.
The current  font which dates from c1840, is shown below.
The second picture in the gallery above is of part of Wotton churchyard wall, showing one of the low openings. It is assumed that these openings were to allow access for sheep to graze the churchyard, a traditional practice in sheep farming areas such as the Downs. The absence of Yew trees (poisonous to livestock) in this churchyard seems to support this assumption.