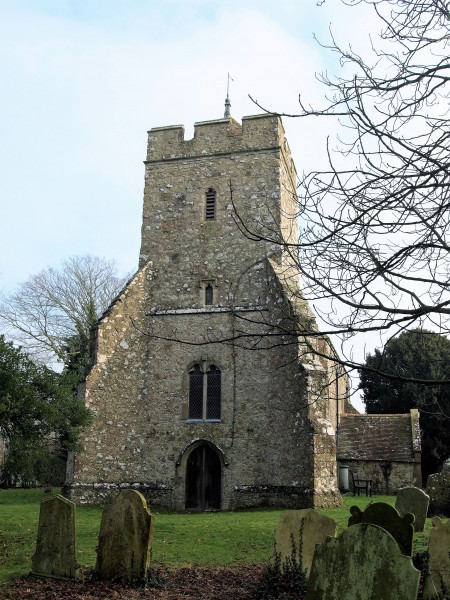 The Church of All Saints at Burmarsh dates from the mid 12th century, and is thought to have been built on the site of a previous Saxon church of which no evidence now exists. The tower and nave were rebuilt in the 14th century, when the walls were crenellated, and also buttressed to preclude further movement on the soft marsh ground.  All Saints is the lowest of the marsh churches, being some 4m below sea level. The original tower arch survives, and dates from the late 12th or early 13th century.
Typical Norman building work is evident in the deeply splayed lancet window in the north wall of the chancel,  in the south doorway, and in the south-east and south-west quoins of the nave and the north-east corner of the chancel, which are of Caen stone brought over from Normandy.
The south doorway, shown below in the gallery, is a fine example of Norman architecture, having been protected by a porch, originally built in the 15th century, and later repaired in the 16th and 19th centuries. The round arch of the doorway is supported on shafts with scalloped capitals. There is a roll moulding, a chevron order, and at the top is a grotesque carved head. There is a similar carved head at the top of the 2-light Decorated west window.
The second photograph is a view in the nave looking east towards the chancel. The pews date from the Victorian re-ordering, and the inscription on the large roof tie-beam was added at the turn of the 19th century.
The third picture shows the fine chancel screen which was installed in memory of two Burmarsh men who were killed in the Great War, 1914-1918.
The first picture in the second gallery is of the 3-light east window. The stained glass was installed in 1878. The top sections depict various aspects of The Ascension. The scenes in the bottom row depict, from left to right:-  Noli me Tangere; Feed my Lambs; Doubting Thomas.
Noli me Tangere is the Latin title, translating to ‘do not touch me’, of a Titian oil painting dated c1514. The subject of the painting is the biblical event of the meeting of Jesus with Mary Magdalene when she discovered Him risen from the tomb.
The second photograph is of the typically round-headed and deeply splayed Norman window in the north wall of the chancel.
The third picture is of a pitch pipe. This interesting item is in a cabinet mounted on the nave wall. The description in the cabinet reads: In churches where neither band nor barrel organ was available, the singing was rendered without any accompaniment, the keynote of the tune being given out on a Pitch Pipe by the Parish Clerk. These pipes were made of wood 18 or 19 inches in length, and in section about 1½ inches square. The mouthpiece at one end was similar to that of an ordinary tin whistle, while at the other end was a wooden plug on which the notes of the scale were marked. The plug was pushed out to the indication mark of the required note, the pipe was blown, and members of the choir took their own particular note by singing the word “Praise” or “Praise ye the Lord”.
The fourth photograph shows one of three medieval bells, two of which are still hung in the tower and rung along with four modern bells (1899 and 1926). The one shown, dating from c1375, was cracked in 1914 and taken down for safety reasons. It weighs 8 cwt (about 400 kg) and now stands in the nave. The Latin inscription on the bell, translated, reads “The bells sing out the name Magdalene”.
The penultimate photograph is of the octagonal font. It is medieval in type, but its condition indicates that it has been re-worked. The bowl is lead lined.
The last photograph is of the Royal Arms of George III, which hang on the wall near to the south door. They are undated, but inclusion of the French fleur de lys in the quartering probably indicates that they are pre Treaty of Amiens, 1801.