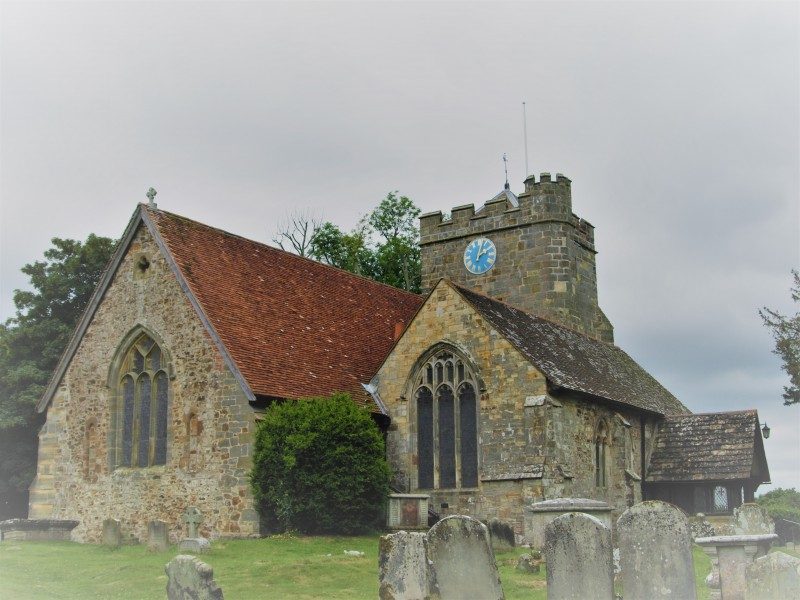 Construction of a stone church at Waldron, on a site believed to have previously been the location of a Saxon timber church, was started in the late 12th century. The list of Rectors recorded on a board on the nave north wall names the first as Bartholomew being the incumbent at All Saints from 1195.
The oldest extant parts of the church are the chancel and nave, although much of the original structure was lost in the extensive Victorian restorations started in 1862. At this time, a south aisle was added, the south wall of the chancel was rebuilt, galleries were removed from the nave and north aisle, and the old box pews and pulpit renewed, along with general internal restoration.
The 13th century lancet window in the chancel north wall is the only one of the original build that remains. It has medieval stained glass quarries featuring vine leaves and corn ears. The window is shown in the gallery below, first photograph.
The next two photographs in the gallery are of the two fonts at All Saints’. Shown first is a rare Saxon font which stands close to the north entrance door. It was returned to the church in 1907 after being discovered at a local farm where it was being used as a cattle trough. The  huge circular basin, fashioned from one block of stone, has a central drainage hole and a channel cut through the rim. The other font, in the church nave, is square and supported on a central column with four corner columnettes. It is quite plain and probably dates from the 19th century.
The first photograph in the second gallery is a view looking east to the chancel from the nave. The chancel arch was rebuilt at the time of major restoration work in the 19th century.
Also part of the Victorian restoration is the mosaic floor in the chancel. This was dedicated to a former rector, the Reverend John Ley, incumbent from 1850 until 1880.
The third photograph is of the east window in the chancel. The 3-light window is from the time of the transition from Decorated Gothic to Perpendicular Gothic. The stained glass depicts Christ in Majesty.
The fourth photograph in the gallery is of the nave looking towards the west end of All Saints’. Showing are the north and south arcades, and some of the floor slabs and brasses in the central aisle floor.
Next is the memorial to Major John Fuller (d 1722) who was a local ironmaster and relation of the infamous Mad Jack Fuller of the well-to-do Fuller families of Waldron and Brightling.
The final photograph shows the octagonal pulpit, and the 1904 organ seen through the arch into the south aisle.
.