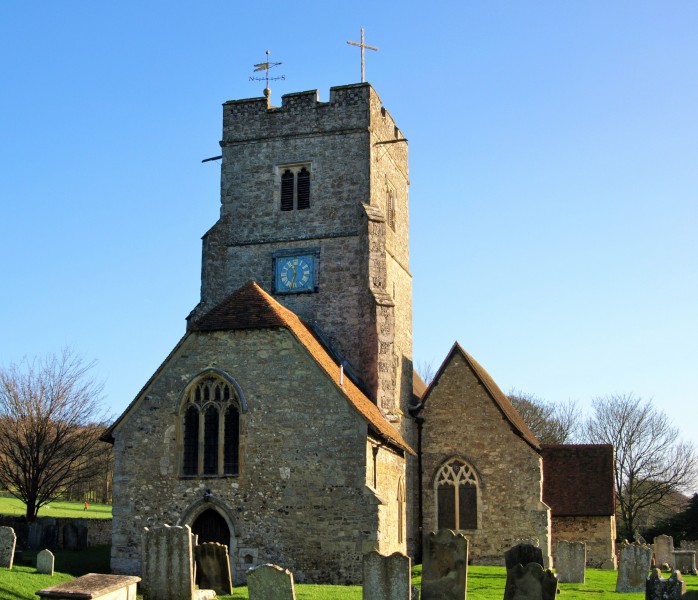 Church of St Mary the Virgin and All Saints

St Mary and All Saints, Boxley is one of a number of ancient churches on a straight line, others being Thurnham and Burham. This may be the route of the old Roman road leading to Rochester, or perhaps a ‘ley line’, a somewhat mystical alignment of ancient spiritual places such as megaliths, stone circles and churches.
The main photograph above shows Boxley church from the west. In the foreground is the outer porch or narthex, which is the oldest extant part of the church, dating from c1100. This was in fact the nave of the early Norman church, the chancel being the current inner porch over which the tower was added later.
The first photograph in the gallery is of the narthex/outer porch at Christmas. Successive alterations here make it difficult to be sure of the original construction. Behind the Christmas tree are the blocked remains of the Norman rood staircase which led to a rood screen between nave and chancel. The tiny door to the left appears to be too small to have served the stairs.
The doorway into the inner porch has a hood-mould with label stops of carved heads. On the left the head is that of a bishop, whilst on the right a king is depicted, possibly Edward II.
The main west doorway into the church via the narthex is shown in picture two. The two centred arch has a hood-mould and there is a stoup to the right of the entrance.
The third photograph shows the ‘new’ nave and weeping chancel, which date from the 13th century.

Above, in the gallery, are photographs of the reredos, north aisle east window, Rood stairs doorway, and the pulpit.

The closer view of the chancel shows the fine marble reredos, which is Victorian, dating from 1876, and the Decorated style east window which has stained glass, also Victorian, depicting the Crucifixion.

Apart from the east window of the south aisle, which contains fragments of medieval glass from Rochester Cathedral, most of the stained glass at St Mary and All Saints was installed in the 19th century. The window shown in the second photograph is in the east wall of the north aisle, and depicts the Transfiguration of Christ. Christ is flanked either side with Old Testament figures, Moses the law maker on the left, with a tablet, and Elijah the prophet on the right with a raven at his shoulder. The three disciples beloware Peter, James and John.
Also at the east end of the north aisle are the narrow doorway which leads to the rood stairs, and a modern statue of Madonna and Child.
The last picture is of the fine octagonal pulpit which is carved with arcades having Bethersden/Sussex marble columnettes.