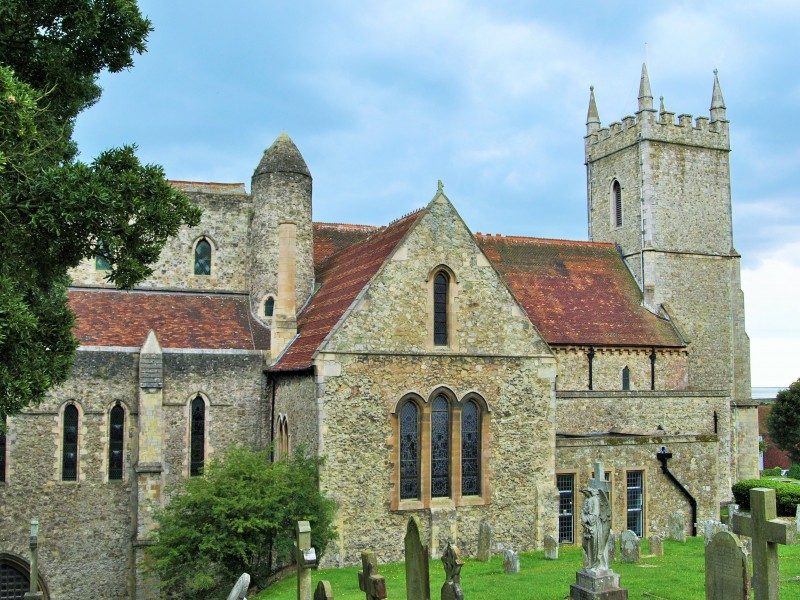 The oldest extant parts of the church are the north transept, originally a Saxon chapel dating from c1000, and the Norman nave, which dates from 1080. That the current north transept incorporated an earlier building, is evidenced by the doorway between the transept and the vestry. Shown below are the two sides of the doorway. The tall Saxon arch is on the north transept side. The other side of the same entrance is clearly Norman, having been built at the same time as the nave. On the opposite (east) wall of the transept there are jambs of another arch which probably originally led to an apse.

During the 12th century,  St Leonard’s was extended by the addition of north and south aisles, and a south transept to form a cruciform church. There are sections of two blocked Norman windows high up in the wall of the nave, above the north arcade arches. The original Norman arches through the nave side walls were replaced with larger arches in the late 13th and early 14th centuries. The small window above the chancel arch lights the triforium walkway where it crosses from one side of the chancel to the other.
The crowning glory of St Leonard’s, Hythe must be the beautiful 13th century chancel, said to be “the finest chancel of any church in England”.
Shown second in the gallery is the south elevation of the chancel, with large decorated arches, triforium and clerestory windows bestowing the appearance of a cathedral.
Seen through the left hand arch in the photograph is a superb sculpture which was the former reredos. It was carved from a single block of Carrera marble in 1881.
The triforium is an arcaded gallery which, at Hythe, forms an upper storey above the arches leading from the chancel to the north and south choir aisles. The round headed arches of the triforium each enclose a pair of pointed arches, showing the transition from Norman to Early English architecture.

The third picture is of the chancel and sanctuary. The lovely east window consists of five shafted lancets, the two narrow outer ones being blind. The stained glass is modern, having been replaced in 1951 after bomb damage in 1940. Scenes depicted include, in the centre, the Ascension of Christ, and in the outer panels, a Cinque Port ship and anti-aircraft gun and searchlights reflecting Hythe’s ancient and modern port defences.


Shown first in the gallery below is the double piscina in the sanctuary south wall, next to a double sedilla. Usually there is just one sedilla for the priest, or three, the second and third being for a deacon and sub-deacon. Above these is a string course which runs around below the east window and on to the north wall. Under this is a band of  alternate  carved rosettes and quatrefoils, similar to those found in the Canterbury Cathedral cloister. Taken with the similarity between the Hythe triforium and the choir at Canterbury it is very likely that the same masons were employed.

The second picture shows the view from the chancel, looking westwards back along the nave to the tower door, the west organ and the font. The tower was added to the church, or perhaps rebuilt, in the 14th century. It had to be rebuilt again in the mid 18th century after crashing down in 1739.
The current organ was installed in 1936, and is part of a split instrument, the east section being in the south choir aisle. Both organs are, however, played from the main console.

The font has a 14th century ornately carved bowl on a 19th century octagonal stem.
The pulpit is 19th century. The mosaics and red marble copings were added later as enhancements.
The fifth photograph in the gallery shows St Katherine’s chapel from the north choir aisle. A Canterbury cross is carved on the wall behind the altar, denoting the position of the act of dedication of the chapel.
Next shown is the porch which was added to St Leonard’s in the 14th century. The arch leading into the main body of the church pre-dates the porch, being 13th century.
Above the porch is a room, known as a parvis, which is accessed from an external staircase. Parvises are not uncommon at medieval churches,  sometimes at ground floor level in front of the church, or often, as at Hythe, above the porch. They were used variously as prisons, schoolrooms, meeting rooms and stores. St Leonard’s parvis was used for Hythe Town Council meetings up until 1794 when the Town Hall was built.
Three mass dials just to the right of the arch leading from the porch into the church, are shown in the seventh picture. This would have been the 12th century south facing outside wall of the church so that a central gnomon would cast a shadow to show the time to ring the bell for Mass.
On display in the church is an iron chest, probably imported from the Low Countries in the second half of the 16th century to hold church valuables and the registers required to be compiled following an edict in 1538 by Cromwell from Henry VIII’s court. This one has two hasp and staples for padlocks and a keyhole for the priest. The visible keyhole is a dummy, the proper one being concealed.
The final photograph in this gallery is of the entrance doorway to the Mackeson family vault which is in the south churchyard wall. The Hythe Brewery was founded in 1699, and was taken over by the Mackeson family in 1801, and then by Whitbreads in the 1920s.
The room under the chancel at St Leonard’s is used as an ossuary, one of only two in the country. Often referred to as the crypt, it should more correctly be known as the ambulatory, a room where priests displayed a holy relic of St Leonard, and worshippers could walk round to show their respects.
The ossuary contains over 2000 skulls and 8000 other bones neatly stacked for display. There are various theories as to the origin of the bones, the most likely being that they were dug up from part of the churchyard when foundations were laid for an extension to the 13th century church.