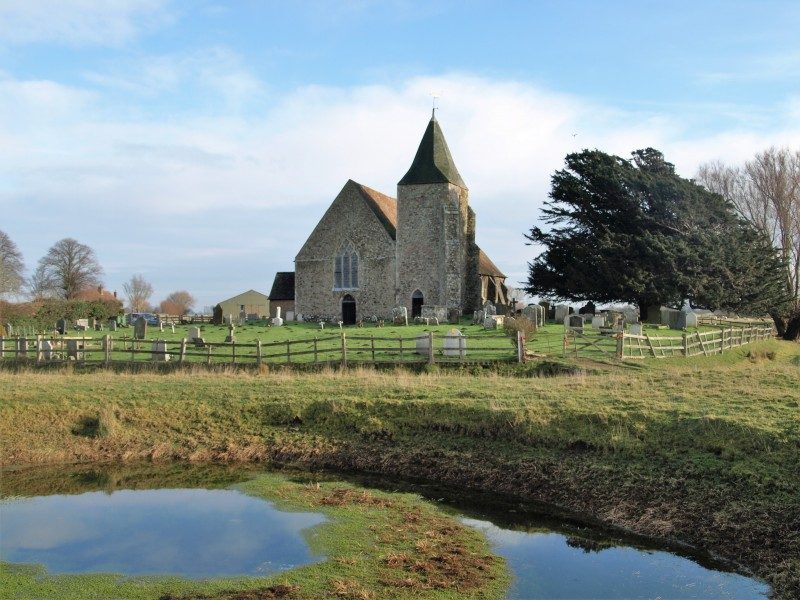 The Church of St Clement at Old Romney was built by the Normans in the mid 12th century, on raised ground close to the former course of the River Rother. Nearby Midley church, now a ruin, was actually built on an island in the middle of the river. However, the Great Storm of 1287 blocked the outlet of the Rother, (already suffering from silting and longshore drift) causing the river to find a new route to the sea at Rye. This led to the decline of Old Romney, and the growth of the settlement some 2 miles towards the sea that became known as New Romney.
The 12th century church of St Clement consisted of a nave and chancel only. The church was enlarged in the 13th century, presumably before the Great Storm, by the addition of aisles and a west tower. A porch was later added to the north of the church, probably early in the 19th century, and there are Georgian box pews and a minstrels’ gallery.
The main photograph above shows the church on raised ground viewed across the churchyard, and the first picture in the gallery below is a closer view, also of the west elevation of the church. The next two photographs are of the nave looking east towards the chancel, the second taken from the minstrels’ gallery. In these photographs are the two hagioscopes, one either side of the chancel arch, the Royal Arms of George III, dated 1800, over the chancel arch, and the crown post roof. On the far left is the doorway to the former staircase to the rood loft which was taken down at the time of the Reformation.
The fourth photograph shows the squint (hagioscope) to the north of the chancel arch. This one has a pointed arch, whereas the squint in the next picture, which is to the south of the chancel arch, has a camber arch. Also showing in the fifth photograph are the remaining sections of the 15th century screen between the south aisle and south chapel, and the 18th century pulpit.
The last photograph in the first gallery is of the opening to the former rood loft stairs, viewed from the east side. Unusually, the medieval timber door frame in the opening has survived. Stored in the doorway opening there is also a collection of salvaged stones, some of which have carvings  associated with gothic architecture.
The first picture in the second gallery shows a chamfered lancet window in the north chancel west wall. The stained glass, installed in 1885, depicts The Good Shepherd.
Next shown is the early 14th century font which has a square Purbeck marble bowl with four corner supporting pillars of Caen stone. The pillar capitals have carved heads, one of which is shown in detail in the next photograph.
The fourth photograph shows the sanctuary. The altar table is 17th century, and the altar rails with close-set turned balusters, and the reredos are early 18th century. The reredos bears inscriptions of The Lord’s Prayer, The Apostles’ Creed, and The Ten Commandments.
The fifth picture is of an 18th century carved chest bearing the inscription Anna Diercks Anno 1768, and is probably of Dutch origin. Next shown is a brass to John and Margaret Ips that is mounted on the nave wall. John Ips (d. 1526) was from the prominent local Ips/Epps family of Romney Marsh, and became a Jurat for Old Romney.
The seventh photograph in this gallery shows a floor slab in the chancel. It is in memory of the Rev. John Deffray, who was born in France in 1661, and became rector of St Clements in 1690. In 1703 he wrote ‘The Christian’s Daily Manual of Prayer and Praises‘ and in 1724 he published ‘The Christian Sacrifice of Praises‘, both being collections of prayers, psalms and praises. His tombstone  bears his French coat of arms, and records his death as September 4th 1738.
The penultimate photograph shows the Georgian minstrels’ gallery and box pews, which retain the pink colour in which they were  painted for the 1962 film Doctor Syn. The Rank film was based on a ‘A Tale of the Romney Marsh‘, the first of a series of novels by Russell Thorndyke featuring a fictional smuggler hero, the Rev. Dr. Christopher Syn.
The last photograph is of the west tower, showing, half way down, a brick ‘relieving arch’, built in to carry the weight of masonry above. The red bricks appear to be re-used salvaged Roman bricks.