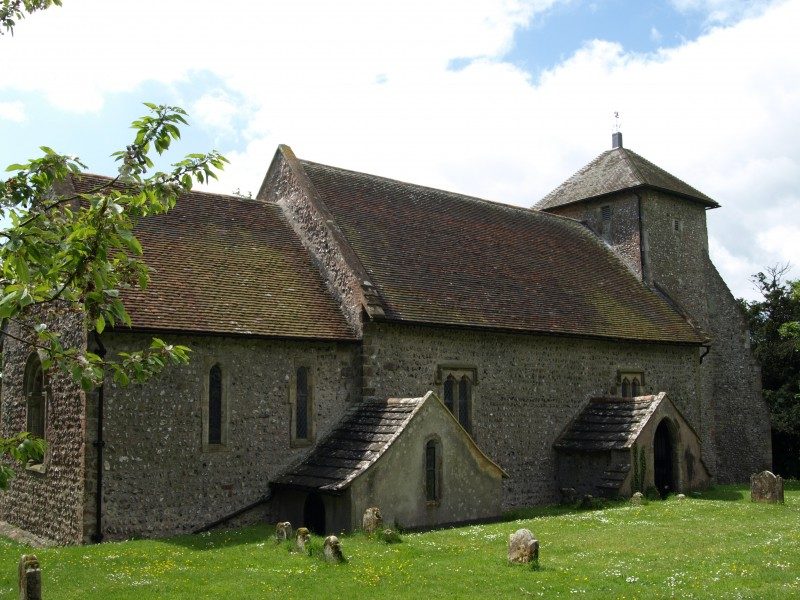 Church of the Transfiguration

This little aisleless church dates from the 12th century, c1170 towards the end of the Norman period. The nave and chancel were built at that time, and the central chancel arch is a fine example of Norman work. The head of the now blocked south doorway is also Norman and has a later, probably 14th century, doorway inserted under. The two side arches to the chancel were added at a later date.

The squat tower was added in the 13th century. The hipped tower roof is a type known as a ‘Sussex Cap’ which is uncommon in other counties.
As with the nave and chancel roofs, the tower roof is now tiled with plain clay tiles, whilst the north porch and vestry carry Horsham stone slates.
Pyecombe church has recently had a south extension built to form a ‘trail facility’ for the much walked South Downs Way which runs adjacent to the churchyard. The excellent facilities afford passers-by use of a kitchen and toilets.
The churchyard is entered through one of only six existing centre-pivoted Tapsel gates, all of which are within 10 miles of Lewes.
There are 13th century encaustic floor tiles in the sanctuary. These were made at Lewes Priory, and feature motifs which include birds, hounds and a stag. The motifs were made by a method in which coloured clay/pigment mixed with hot beeswax was burnt into the tiles.

The circular font dates from c1170 when the church was originally built. The lead decoration is in four bands, the wide bottom one being in the form of arcading. There are only two other such fonts in Sussex.

The stained glass at Pyecombe church is of interest. The east window depicts the Crucifixion and dates from 1898. The two light west window is of the Adoration of the Shepherds, and it is the newest of the stained glass, dating from 1909. Below, from left to right are photographs of the east window, the west window, the south chancel lancet window nearest the altar with glass of the Madonna and Child, and the north chancel window with glass depicting the Good Shepherd.