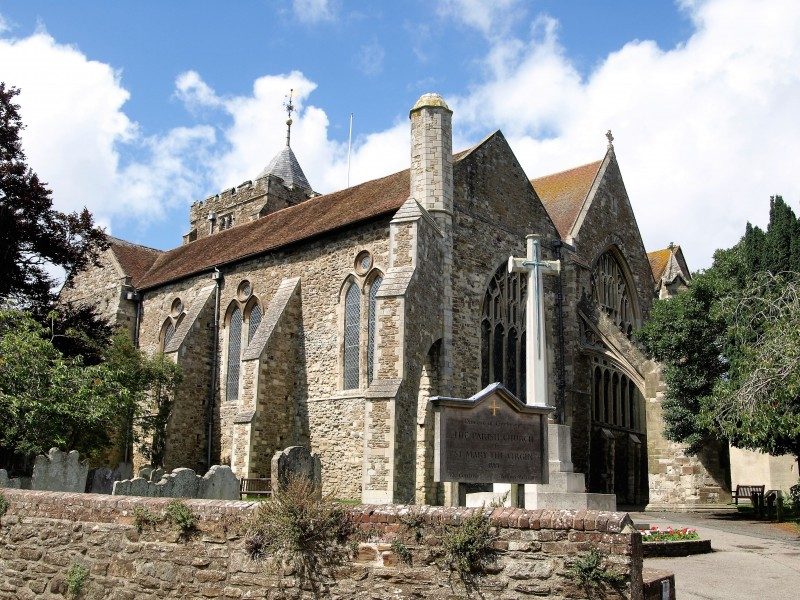 Construction of St Mary’s Church at Rye was started early in the 12th century with the chancel, crossing tower, and transepts. The cruciform shape was completed when the nave and the north and south aisles were built in the second half of that century.
The north chapel, later named the Clare Chapel, was added c1220, followed by the south chapel, now the choir vestry, c1250.
14th century additions were, a vestry at the south-east corner of the nave, and a separate tower entrance next to the north transept entrance. Buttresses were constructed at the corners of the west end of the nave.
Alterations to the chancel, particularly to the south arcade, were made in the 15th century, and a large flying buttress was constructed to counter the thrust of the eastern end of the arcade. The Victorians added a similar buttress at the eastern end of the arcade between chancel and Clare Chapel. Also in the 15th century a porch was built onto the south aisle.
The first photograph in the gallery below shows the view from the crossing, through the chancel and sacristy to the east window. The middle pillar of the north arcade, seen on the left in the photograph, is original Early English dating from c1220, and has an ornately carved capital. The remaining pillars of the north and south arcades were renewed in the 15th century and have less detailed capitals.
The second photograph is of the view in the opposite direction, west from the crossing. Construction of the nave was started towards the end of the Norman era, and was completed in the Norman/Early English Transitional period. Although subsequently repaired, the arcade arches still show the development of architecture style during the late 12th century, the arches becoming progressively more pointed as construction work proceeded westward, the westernmost arches really belonging to the  Early English gothic period.
Next shown is part of the south transept with typical semi-circular Norman arches. The clerestory windows above the south aisle arcade were rebuilt in 1882 in Early English style.
The fourth picture shows the chancel east window, and the screen between chancel and choir vestry. The east window is 15th century Perpendicular Gothic, and comprises two rows of six lights with tracery over. The stained glass was installed in 1952 and depicts various scenes of the life of Christ, including the Annunciation, Nativity, Crucifixion and Resurrection.
Next shown are the original ‘quarter boys’, taken down from above the church clock where they struck at the ‘quarter past’ and ‘quarter to’ times. Originally installed above the 16th century clock in 1760, they have been replaced with fibreglass copies, and are now on display by the Clare Chapel north windows. Just along from these are two more north lancets with the St George memorial (to Admiral Sir George Warrender d.1917) between them. The sixth photograph shows this, and the arched openings in the window splays, which allowed access for maintenance.
Finally shown in this gallery is a view from the chancel across to the Clare Chapel showing the c1220 arcade pillar and the chapel east window beyond. The 5-light window has fine stained glass installed in 1912 depicting; in lights 2-4 The Risen Christ; to the left St Michael above St John; on the right St Gabriel above St Clare.
The first photograph in the second gallery is of the 5-light Perpendicular Gothic style window in the west end of the nave. The stained glass, depicting the Nativity with angels in the upper sections and in the tracery, was installed in 1937. The second photograph shows a Decorated style window in the north aisle with stained glass depicting from left to right, St Bartholomew; Christ; St Paul. The biblical text is ‘Go ye into all the world and preach the gospel to every creature’.
Next shown is the font which dates from 1845. It is a copy of the historically important font at St Peter’s Church, Newenden, which has fine Saxon or early Norman carvings around the bowl, including a wyvern and lion.
The fourth photograph in this gallery is of the clock mechanism and the stairs leading to the top of the tower. The clock mechanism dates from 1561/2 and is one of the oldest church turret clocks in the country that is still in working order. Next shown is one of the eight bells, weighing a total of almost 5 tons. They were cast in 1775 to replace the original bells which were stolen in a devastating French raid in 1377 when the church and much of the town was set on fire. The bells were recovered the following year when men from Rye and Winchelsea sailed to Normandy to inflict similar damage to two towns there. One of the bells was hung in Rye’s aptly named Watchbell Street to warn of any future invasion by the French, and was not returned to St Mary’s until the early 1500s.

The last two photographs are external views, the first showing the north entrance and tower, and the second, the lovely view south from the tower out over the River Rother and Romney Marsh. In the centre is the Ypres Tower, which houses the Rye Castle Museum.
Further reading:
1) Rye A History of A Sussex Cinque Port to 1660

2) An Old Gate of England, Rye, Romney Marsh and the Western Cinque Ports

3) The Cinque Ports of Kent and Sussex