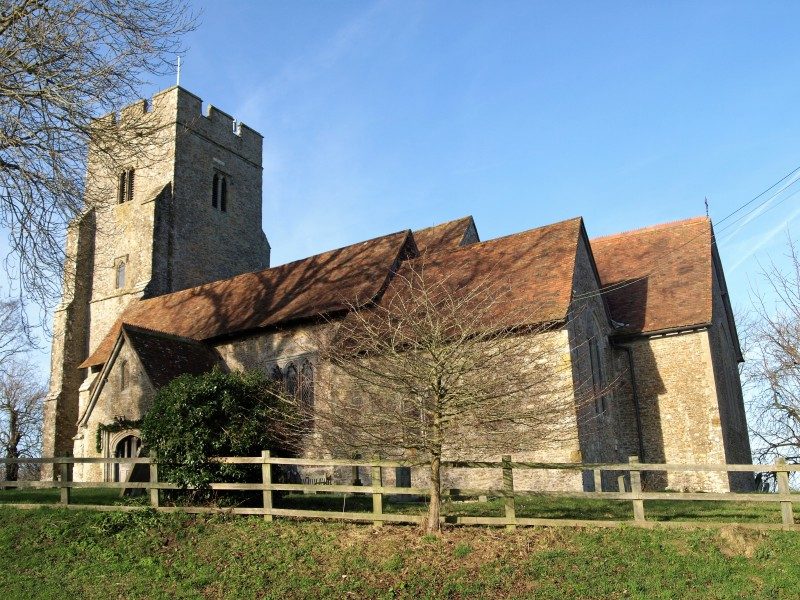 St Mary the Virgin Church at Stone-in-Oxney was rebuilt following a serious fire in 1464, and little of any earlier building survives. There is conjecture that St Mary’s stands on the site of a Roman Mithraic temple, although the earliest record of a church here is a document, held at the Dean and Chapter, Canterbury Cathedral, dated 1265. The first recorded vicar of the 13th century church is one Thomas de Maydenston who served from 1287.
Apart from the usual internal changes at the Reformation and the Victorian restoration of 1874, the church has changed little since the 15th century Perpendicular Gothic building was built.  It consists of nave with aisles, chancel and north and south chapels, west tower and south porch.
The first photograph in the gallery above is a general view in the nave looing towards the chancel. At the top is one of the roof tie-beams and crown post, and behind this and above the chancel arch are two unusually positioned trefoil-headed lancet windows. These would have certainly thrown light on the rood area and may have originally contained statues.
The next picture is of the 15th century north chapel screen. Above this, the 13th century arch between the chapel and aisle is one of the few sections of the earlier church which survived the 1464 fire. The north chapel was formerly used as a schoolroom.
The third photograph is a view from the south aisle across to the pulpit, chancel arch and east end of the north arcade.
The first photograph in the second gallery shows the Roman Mithraic altar, which stands under the tower. It is 3ft 4ins tall, has a hollowed out top like a basin, and the carved figure of a bull, halfway down on the side. It is made from Kentish ragstone, probably quarried near Hythe where the Romans built Stutfall Castle and the harbour at Port Lemanus, on the old course of the River Rother, then known as the Limen. A straightforward journey along the navigable Limen would have brought the stone to Oxney.
It was used as a horse block at the Ferry Inn for many years, before being moved to the vicarage garden, and from there to St Mary’s.
This Mithraic Altar stone dates from between the 1st and 4th centuries AD, when Mithraism was popular with the Roman military. Very little is known for certain about the origins of this mysterious religion. It is variously attributed to have its foundation in Persia, where the god Mithras was born from a rock, or from a religious culture developed in Rome but having a god of the same name, or from a Greco-Roman theory proposed to explain the movement of heavenly bodies discovered by the Greek astronomer Hipparchus. The latter theory assumed that there must be a previously unknown god powerful enough to move cosmic bodies and therefore capable of controlling the universe.
The next photograph is a close-up of the carving of a bull which appears on the altar stone.  All four sides of the altar may have originally carried this representation of a bull. Whilst the generally held belief is that the bull carving is associated with the Roman cult of Mithraism in which the most important ceremony was the sacrifice of a bull, there is also an alternative theory that the carving is of Apis, a sacred bull worshipped by the ancient Egyptians.
The third picture is of the plain octagonal font, shown here decorated at Christmastime. Next is a photograph of the only stained glass in St Mary’s. This ancient medieval glass is in the cinquefoil heads of the 15th century 2-light window in the north chapel north wall.
The fifth photograph is of an interesting lead plaque, dated 1783, bearing the names of church wardens I. Milsted and W. Samson, and of the plumber C. Bexhill, presumably the plumber who undertook renewal of the lead roof at the time.
The last photograph is of a carved head on the external wall by the corner of the south aisle and south chapel. The head bears a mitre, indicating that this is a depiction of a bishop or, perhaps, abbot from the pre-reformation time when the church advowson was held by the Monastery of St Augustine.