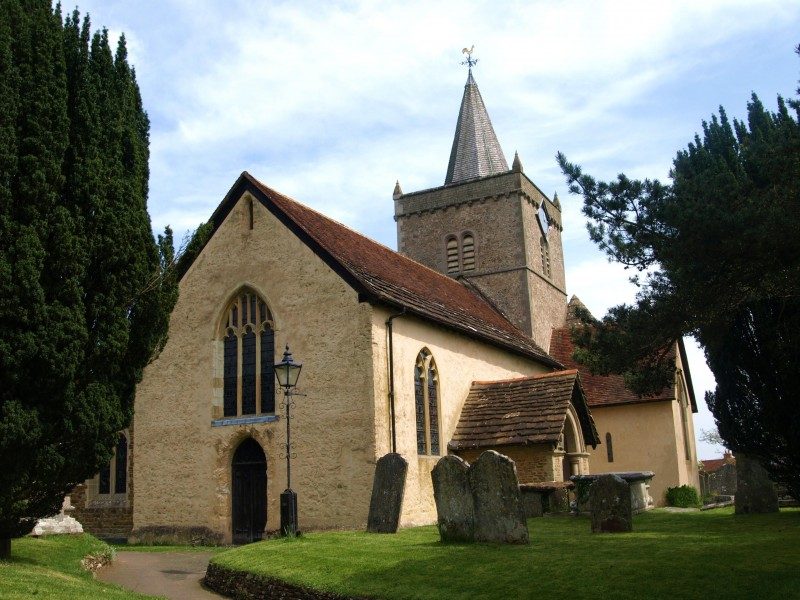 The nave of the parish church of All Saints, Witley dates from Saxon times, witnessed by its high proportions, its chamfered plinth, herringbone masonry in the west wall and double-splayed windows in the south and west walls.
Shown above is All Saints from the south-west. The small window at the top of the west gable is Saxon.

The first picture in the gallery above shows a partly blocked double splayed Saxon window in the south wall of the nave, with wall painting over. The wall paintings at Witley are true frescoes, (a technique of mural painting executed on freshly laid lime plaster) dating from the early 12th century, perhaps 1130.
The second photograph shows the main section of murals on the nave wall, which are painted in three horizontal bands. The uppermost register contains scenes from the Life of the Virgin, and, above the doorway, the feast of Dives (the rich man in the parable of the rich man and Lazarus). The middle band is of resurrection scenes, and the Harrowing of Hell.
The lower register is of Christ appearing to St Peter at Lake Tiberias, and a 13th century consecration cross.

The third picture is of a further mural discovered on the north arcade return during restoration work in the late 20th century.

The first picture in the second gallery is of a view eastwards from  the central crossing tower, which was built in the position of the Saxon chancel at the end of the 12th century. Around the same time, the ‘new’ chancel and north and south transepts were built forming a cruciform building. The 3-light east window was inserted into the chancel during the 14th century. The stained glass, installed in 1888, depicts Christ in Glory surrounded by Apostles.
The second photograph is of the very large semi- circular arched south doorway of golden orange Bargate stone. This is thought to have been a replacement, c1180, for an earlier Saxon doorway.
Next is a photograph of the piscina in the chancel which  dates to c1350 and has an aumbry over.
The fourth photograph is of the nave, looking towards the 15th century west window.
Next shown is a brass which is in the Easter sepulchre. It is to Thomas Jones, Jane his wife and their six children. The inscription tells us that Thomas was one of the Servers of the Chamber of our sovereign lord King Henry VIII.
Shown last is the re-cut 13th century octagonal font.  It has a centre supporting stem surrounded by detached columns.
.