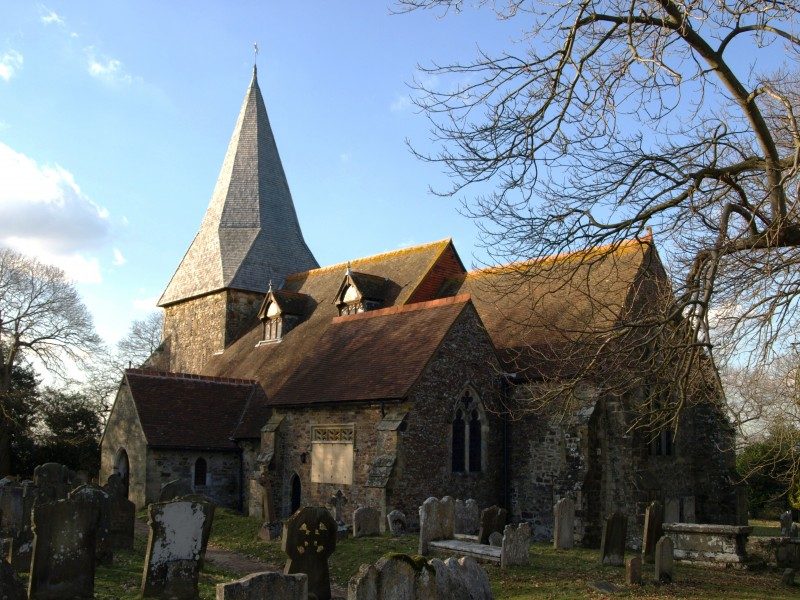 The lower stage of the tower at All Saints Church, Beckley  dates from no later than 1100, and may even be pre-Conquest. The herringbone masonry, seen in the tower walls, is typically found in Anglo-Saxon buildings. Other parts of the tower are late 12th century, whilst the spire was probably built during the following century. The nave was rebuilt c1300, and the chancel is later 14th century.

Unusually, the chancel arch extends to the full width of the nave, with large octagonal piers also supporting the arches to the north and south chapels. The resulting visual effect is one of openness not normally found in smaller churches.

The second photograph in the gallery shows the rood loft stairs and a small piscina in the north chapel. The stone upper section of the stairs would have been accessed by a wooden staircase from the chapel. Unusually, the rood stairs at All Saints are east of the chancel arch.
There is some lovely stained glass at All Saints. The three windows pictured in the gallery are attributed to Victorian stained glass artist George Ostrehan. The main east window depicts Christ in Majesty, and is dedicated to the Rev Shadforth who died in 1897. The east window of the north chapel depicts the four apostles, St Peter, St Andrew, St James the Great and St John. The north window of the north chapel is of St Paul and is dedicated to the Reverend Robert Poole, rector from 1900 to 1908.
Other interesting and unusual items at this charming little church are shown in the second gallery. Lecterns with an integral pew behind are uncommon, but this one at All Saints also has a seat in front of the lectern, making it a rare item indeed.
The large chest, made from a hollowed out tree trunk, and fitted with iron bands, is thought to be over 800 years old.
The fluted font , made from Sussex marble, is 18th century and replaced a 12th century one. Surviving fragments of the earlier font show that it was also fluted, an unusual feature, and the only one in Sussex.