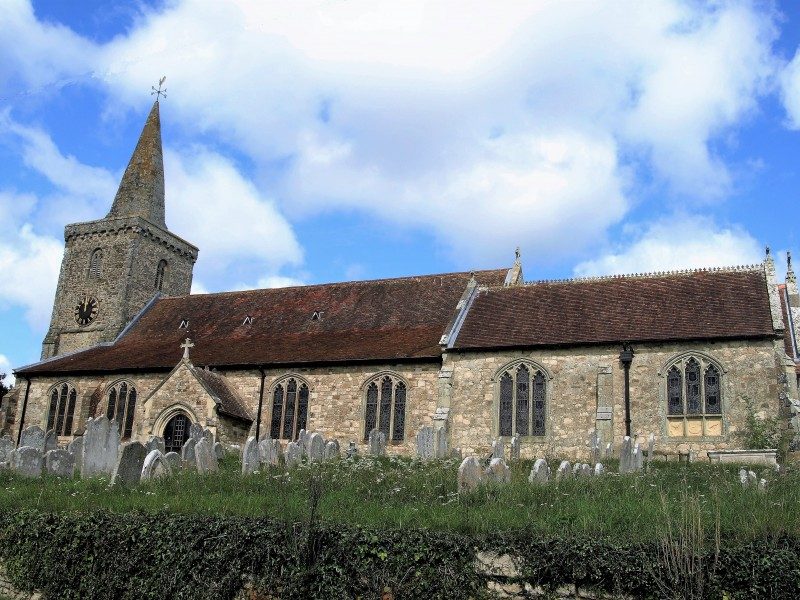 The parish church of St Mary the Virgin dates from the late 12th century, the earliest part being the nave. North and south aisles, the chancel, and the tower were all added in the 13th century. In the 15th century the north and south chapels and the south porch were added.
The tower is very unusual, having, at ground floor level, arched openings to the north, west and south. It is one of only four church towers in the country constructed in this way. Within the open area formed by the tower base there is an external ladder which gives access to the bell chamber on the 1st floor. The first photograph in the gallery below shows the wooden ladder between the north arch and the west entrance doorway.
The second photograph in the gallery is a view along the 12th century nave looking east. The north and south arcades, dating from the early 13th century, have characteristic I.O.W circular piers, square chamfered abaci and Norman transitional pointed arches. The nave roof was renewed in the general Victorian restoration of 1866.
The next photograph was also taken in the nave, this one looking west and up to the bell ringers gallery in the tower. There is a peel of eight bells, the earliest dating from 1594.
The fourth photograph is of the font. The square bowl dates from c1200, and stands on a 19th century pedestal.
Next is a closer view of the chancel showing the 3-light window set in the east wall which was rebuilt in the second Victorian restoration of 1887. The stained glass depicts the Transfiguration. Also in the picture is the splendid Dutch brass chandelier dated 1798.
The final photograph in this gallery is of the south chapel which is notable for a fine collection of monuments to the Oglander family. Some of these are detailed in the second gallery below. The chapel also has a 3-light east window with stained glass of the Resurrection, a Jacobean altar table, and a large painting of Michelangelo’s Pieta statue of the Virgin Mary with the body of Jesus Christ taken down from the cross.
The second gallery starts with a photograph of one of the fine collection of tombs at St Mary’s. This one is the tomb of Elizabeth Howlys and stands on the north wall of the north (De Aula) chapel. On the opposite, south wall, also with three cusped lozenges decoration, is an almost identical tomb to her husband, William Howlys d 1520.
The next four photographs are of tombs in the Oglander chapel. The Oglander family have lived on the Isle of Wight since the early 12th century, soon after the Norman Conquest. Their family seat was at Nunwell House in Brading, and this historic building and gardens are now open to the public.
The first tomb of the four shown is to Sir John Oglander d 1655. It features a recumbent figure in full armour, carved in France out of oak. It does not resemble Sir John himself who is said to have brought the wooden effigy home from France along with a smaller carved oak figure which is set in a recess above, and commemorates his son, George Oglander d 1632.
The next tomb photographed commemorates Sir Oliver Oglander d 1536. The tomb carvings are of Sir Oliver (kneeling), four sons, his wife and three daughters. Sir Oliver was Lieutenant Governor of Guernsey.
The third Oglander tomb is to Sir John Oglander d 1483, and the fourth commemorates Sir William Oglander d 1608. This last one also has a carved oak recumbent figure, probably sourced at the same time as the two other oak figures.
The final photograph in the gallery is of the 17th century oak parish chest with the traditional three locks.
.