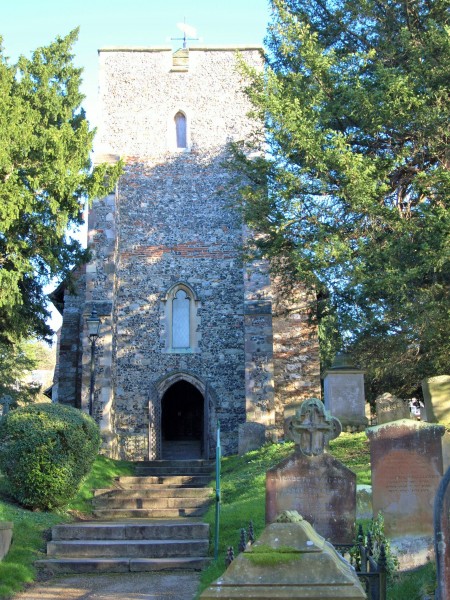 St Martin’s is the oldest church in the English-speaking world that has remained in continuous use since it was built.
In AD 731, the Venerable Bede, the ‘Father of English History’, completed his Ecclesiastical History of the English People, recording that the church was built during the Roman occupation of Britain (AD 43 to AD 409/410).
St Martin, who became Bishop of Tours, lived from AD 316 to 397, although dedication of the church was probably not carried out during his lifetime.

Above, in the gallery, one of the sections of Roman wall in the chancel, probably dating from the latter part of the Roman era, during the 4th century. The other two pictures in the gallery are of the Saxon nave. The first is a view looking east towards the chancel arch, and the second shows the west wall of the nave. The roof was rebuilt in the 14th century.

The nave is Saxon, added to the Roman building after St Augustine arrived in Kent in AD 597 to convert the Anglo-Saxons to Christianity. Queen Bertha, a French princess who married Ethelbert, king of Kent c580, used St Martin’s for worship, as did the Augustinian monks in their mission to convert the people of Kent.
A round-headed south doorway was inserted in the Roman wall in Saxon times, but later blocked in. The statue in the blocked doorway is of Queen Bertha, sculpted in 1997 by Sister Concordia Scott, a Benedictine nun at Minster Abbey in Kent. She was a prolific sculptor who has many sculptures displayed in cathedrals and churches across the Christian world. She became Prioress of Minster Abbey in 1984, and died in 2014 aged 89.

The 12th century font was made from a well head in the cathedral cloisters between 1155 and 1165.

The fourth gallery photograph is of a copy of a 14th century Christmatory, the original now being held in Canterbury cathedral crypt. Used for storing holy oils, this is one of only two that avoided destruction in Henry VIII’s reformation. It was discovered in 1849 hidden high up on the building’s wall plate.

Next is a picture of one of the north windows in the nave, now with stained glass which depicts women, including Queen Bertha and her daughter Ethelburga preaching Christianity to the Anglo-Saxons.

The final photograph shows the small round-headed piscina in the nave. It is probably 12th century.