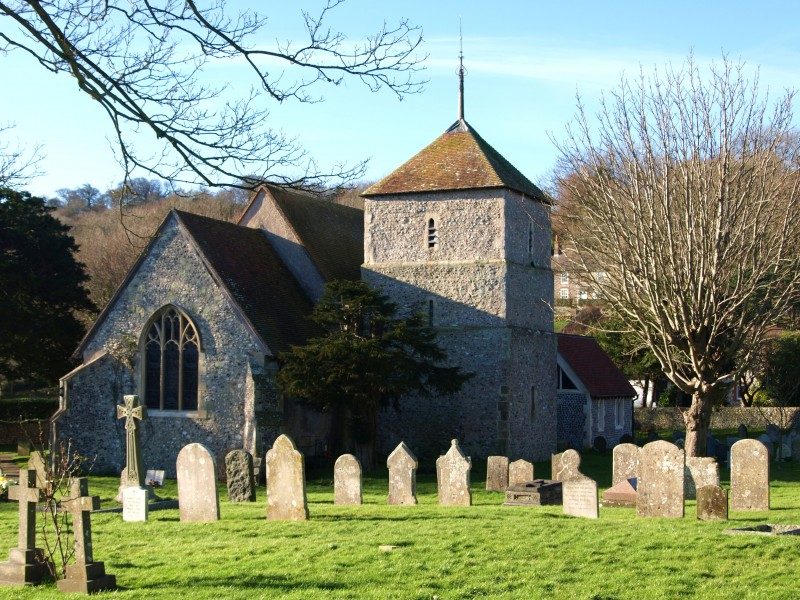 The oldest extant part of the church of St Simon and St Jude is the tower which is Saxon or possibly very early Norman. The squat tower is built in three stages and originally had an arch in its east elevation linking it to an apse. The tower and the apse were used as the nave and chancel respectively. The outline of the blocked round headed arch can be seen in the tower east wall, and the foundations of the apse were discovered in the 19th century. The nave and chancel were added in the 12th century, but perhaps not laid out at the same time, as the chancel is offset noticeably to the north. They are structurally separate from the tower. The 11th century tower has long narrow round headed windows typical of the time, and a west doorway rebuilt in the original style.

The large 13th century half arch in the nave north wall led to the tower, and replaced a smaller late 12th century arch of which the jamb can be
seen to the left. The doorway was inserted at a later date.

Two round-headed rere-arches which support the inner masonry above former lancet windows, now blocked, in the south wall of the chancel, date it to the 12th century. To the right is a 14th century blocked arch.

A stone tomb slab, which is set into the half arch in the nave north wall, bears the arms of the Bardolph baronry and possibly dates to 1304 when the 1st Baron, Hugh Bardolph, died.

The modern cylindrical font incorporates a section of the original 12th century font, and has been carved to replicate it. The organ, built in 1960 by F. H. Browne & Sons of Ash, in Kent, and set as a bridge over the nave, is a superb feature.