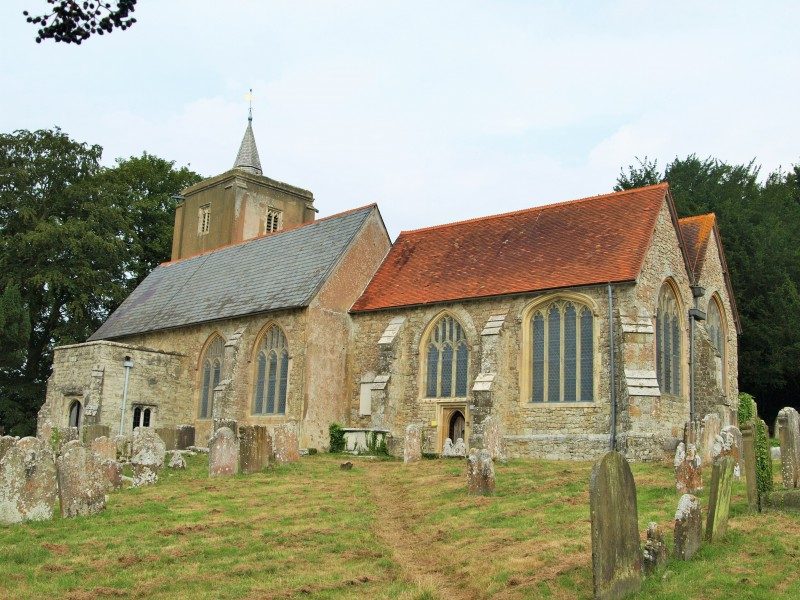 This redundant church is under the care of The Churches Conservation Trust. It stands in an isolated but nonetheless beautiful spot on a hill overlooking the Medway valley. Although the post town is East Peckham, it was never really associated with the modern town which grew up down around the river. Rather it served Roydon Hall and the surrounding farms.
St M ichaels is built from Kentish ragstone, and dates originally from the mid 12th century. Part of the chancel and nave north walls are from this period, and there is a Norman window above the pulpit, now with Victorian stained glass depicting the Good Shepherd.
The chancel was extended at the end of the 12th century, and then during the 13th century, the south aisle and south chapel were added.
The tower was built c1300 and the porch c1500.

Shown second in the gallery is the chapel east window and marble memorial to Roger and William Twysden. The Twysden family owned the nearby mansion, Roydon Hall, after it passed to them when William Twysden married Elizabeth, daughter of Thomas Roydon, in 1539. Roydon Hall remained with the Twysden family for the next 300 years. The marble tablet in the form of two scrolled panels is in memory of Twysden descendents Sir William (1566-1628), 1st baronet, and Sir Roger (1597-1672), 2nd baronet, who became member of parliament for Winchelsea in Sussex in 1625.

St Michael’s has numerous interesting memorials.
There are two ledger slabs set in the nave floor. The first shown in the gallery is a slab with brasses of William and Margaret Wheatenhall. William lived at East Peckham and was Sheriff of Kent in 1526. The second slab has connection to the Weald iron industry.
The third photograph is of memorials on the north wall of the chancel. The upper memorial is to Elizabeth, granddaughter of Sir William Wheatenhall. Below this is a medieval bracket which supports the base of a statue destroyed in the Reformation.