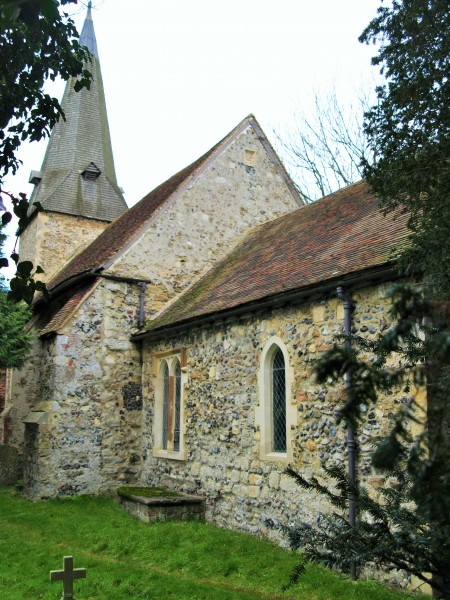 At the eastern end of the nave of St Mary’s there are ‘long and short’ quoins of Quarr stone, from the Isle of Wight, which date the earliest part of the church to the late 11th century. The chancel and north aisle were added by the Normans during the following century, and then the west tower and chancel extension were built in the 13th century.
The main photograph above shows the church of St Mary the Virgin from the south east. The lancet window in the south wall of the chancel is contemporary with the construction of the chancel extension in the 13th century, whilst the larger two light window was inserted in the 15th century.
A general view of the nave is shown in the first picture in the gallery. The chancel arch dates from the late 15th century. The crown post roof is
probably late 14th century. The box pews were installed  in the 18th century, and the floor was tiled at the same time.
The chancel east window is 14th century. The stained glass was fitted in the 20th century and depicts The Annunciation.
The third gallery picture shows the 1688 Royal Arms of James ll. the Arms were formerly fitted inside the chancel arch, but are now hung above the arch. James II was the last catholic monarch of England. He was deposed by the protestant William III in the ‘Glorious Revolution’, and the latter’s royal cypher, WR has been added at the top of the Arms of James II.

The most famous item at the Church of St Mary the Virgin is the Fordwich Stone, shown in the gallery picture 1. Sometimes referred to as the Augustine Stone because it is thought that it could be the cover of the tomb of St Augustine of Canterbury. However, the 1.7m long carved limestone slab has been dated to early Norman times, c1100, and St Augustine died in AD 604, so if it is associated with the saint it could perhaps be that his body was re-interred after the Conquest. The Stone was taken from St Mary’s to Canterbury Cathedral in 1760, but returned to the church in 1877.
The second photograph is of one of two early 14th century two light windows in the north aisle. There are three others in the south wall of the nave. This one has medieval glass in the top quatrefoils, depicting, on the left, the Virgin and Child, and on the right, the Coronation of the Virgin.
The next photographs are of a Holy water stoop in nave south wall, to the right of the door, and an alms box in the central aisle inscribed 1953 and ER, to commemorate the coronation.