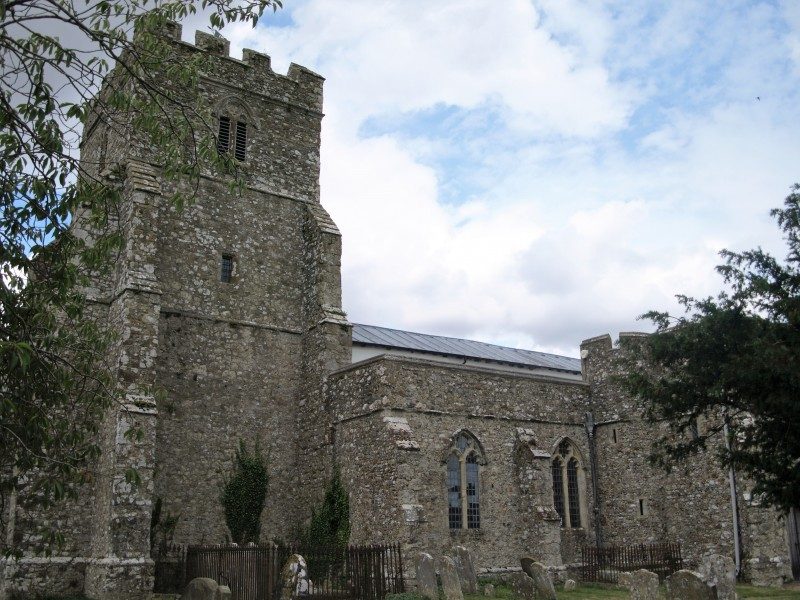 A church at Ivychurch is referred to in a manuscript, dating from c1087-1090, held in Canterbury Cathedral library. The manuscript, named the Domesday Monachorum, is a collection of records relating to the holdings of the Archbishop of Canterbury, and refers to Ivychurch as ‘Iuecirce’.
Nothing now remains of a Saxon or Norman church here, save perhaps for a small piece of carved stone, found in 2006 during renovation work, that dates probably to the first half of the 12th century.
The earliest extant parts of the church are mid 13th century. A section of the south wall east of the porch, and buttresses around the chancel east window are of this date, although the latter were re-faced during the Victorian renovation, c1880. Internally, at the foot of the 13th century section of south wall, in the south aisle and chapel, there is a contemporary low stone bench.
Much of the west end of St George’s is mid 14th century with the tower having been added at the end of that century, or perhaps early in the 15th. The south porch is also mid 14th century and has a parvis room over.
The first picture in the gallery shows the church from the north-west, and gives an idea of the very large size of St George’s. It is over 40m long and almost 19m wide, leading to it being known as ‘the Cathedral of Romney Marsh’. The size of the church is emphasised in the second and third photographs, which show the nave unseated, with seven bay arcades, and with clerestory windows.
The ‘Cathedral of Romney Marsh’ was built on land held by the Archbishops of Canterbury, an office which required the building to reflect the importance of such a holding in both size and style. The north and south clerestory windows to the nave are identical to the quatrefoil clerestory windows  in the south aisle at Canterbury Cathedral indicating that the same masons worked on the two buildings. The parish population at Ivychurch has indeed never been large enough in itself to warrant a church of this size.
Above, in the gallery, the first picture shows the pointed arches of the north arcade, of which there are seven in total, as there are in the south arcade. They  appear to be late 14th century and have two hollow-chamfered orders and octagonal columns with moulded capitals.
The second photograph is of the north aisle, which now houses a collection of various items such as farm machinery and tools.
Finally shown is the octagonal font. It is mounted on two octagonal steps, and dates from the 15th century.