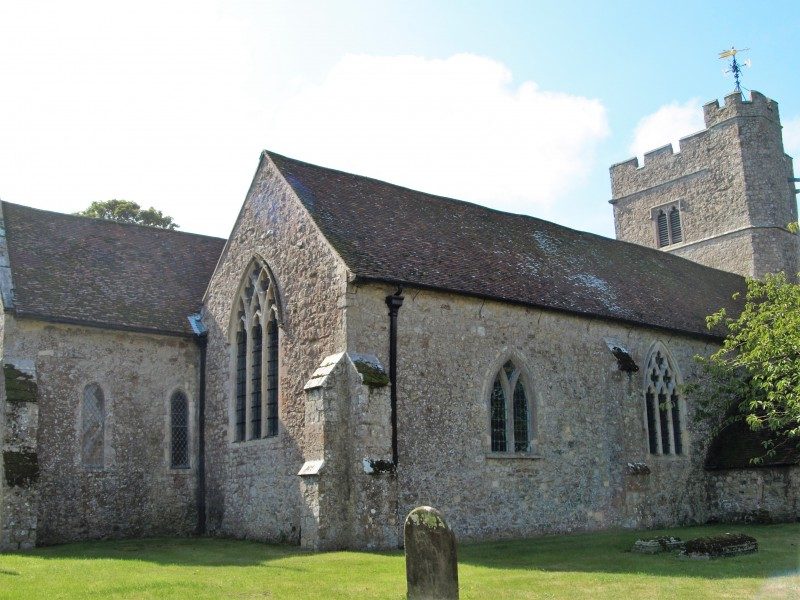 The main extant parts of St Peter and St Paul at Newchurch were built in the 13th and 14th century, although a church existed here at least as early as the 11th century. The present nave is 14th century, but the chancel survives from the first half of the 13th century, as does the plain chancel arch and the arches to the north and south chapels from the chancel, indicating that the chapels existed in the 13th century. The present aisles and chapels are, however, from the 14th century, so rebuilding must have been undertaken at some stage.
The first two stages of the west tower were built in the late 14th or early 15th century, but subsidence led to the tower leaning over to the west, and necessitating buttressing to prevent further movement. When the third stage was added it was properly built vertically, thereby giving the tower its characteristic ‘bent’ appearance, as can be seen in the first photograph in the gallery below. The tower is finished with crenellations above a string course with gargoyles at three corners, there being a stair turret at the fourth (north-east) corner.
The second picture in the gallery above is of the 13th century chancel seen through the broad, high pointed chancel arch. There are two lancet windows to the north wall and one to the south, beyond the eastern ends of the north and south chapels. The east window was renewed in the general restoration of 1845, and is shown in more detail in the third photograph. The four main lights have grisaille glass and central motifs, the first and fourth being angels with harps, and the second and third being angels with scrolls. The colourful glass in the tracery sections features various animals including a sheep, a horse and a lion, and the top sexfoil light depicts Christ addressing his disciples.
The first photograph in the gallery above shows the nave looking back through the chancel arch towards the tower arch. The nave roof has 4 crown posts on double chamfered tie-beams, and dates to the 15th century.
The next photograph is of the south or Lady chapel, taken from the south aisle. It shows the 15th century carved oak screen which separates the chapel from the south aisle. The chapel east window, shown in the third photograph, consists of 3 main lights with 2 trefoil and 1 sexfoil light over. The 2 trefoil lights include fragments of medieval glass.
A piscina and former aumbry on the south wall of the chapel are shown in the fourth picture. There is a statue of Madonna and Child in the piscina.
Shown next in the gallery is the octagonal font which dates from the 15th century. The bowl is decorated with shields and roses, and the stem is buttressed. One of the shields is carved with crossed keys to represent St Peter, and another has a sword, the symbol of St Paul. The two refer to the church dedication of St Peter and St Paul.
The final photograph is of a Newchurch village history display in the north chapel. The display, researched and presented by local residents, includes information panels and a collection of implements formerly used in and around the village.