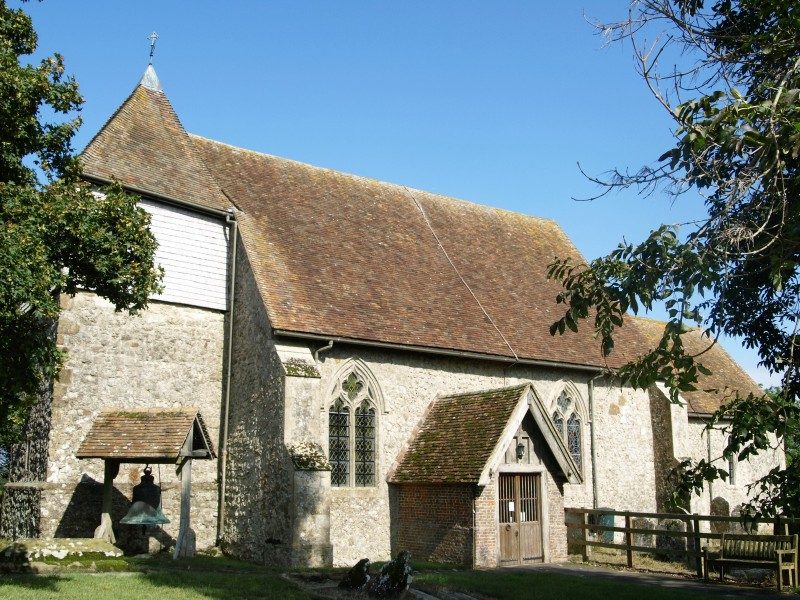 This little church at Bilsington is accessed via a farmyard opposite the Bilsington Monument, a 16m high obelisk erected in 1835 in memory of Sir William Cosway.
Views from the church itself are beautiful, extending across the Royal Military Canal and Romney Marsh. A church here was recorded in the Domesday Survey of 1086, possibly a Saxon building, but no evidence of this remains. The current building dates originally to the 12th century, there being a blocked Norman window over the south entrance, and an Early English chancel arch and chancel.
In the 16th century, the tower was added at the west end of the nave. It has 2 stages, set on a high plinth, and with the second stage clad with wood shingles. The shallow pyramid shaped spire, similar to a ‘Sussex Cap’, is roofed with plain tiles matching the nave and chancel roofs.
Internally, above the tower arch, is some re-used carved masonry dating to the 12th century.
The first picture in the gallery above is of the 12th century ‘weeping’ chancel seen through the Early English chancel arch. The triple lancet east window was installed in the restoration of 1883, to replace the three original single lancets. The centre section stained glass depicting Christ the Consoler was fitted in 1883, and the left and right lancet sections, depicting St Paul and St John respectively were glazed after 1920.
The second photograph shows the sedilia and piscina in the chancel south wall. They were restored in the 19th century.
The next picture shows the south wall of the nave with blocked doorways which led to the head and foot of the rood stairs pre-Reformation, and a blocked Early English nave window.
The first photograph in the gallery above shows the south entrance area. Above the doorway is a blocked Norman window with a small statue of St Augustine. To the east and adjacent to the door is a 14th century holy water stoup.
The next two photographs are of 14th century 2 light windows which are in the north nave wall. The top lights contain fragments of 14th century glass. The first shown has a sexfoil light with glass depicting the Virgin and Child, and the second has a quatrefoil light with glass depicting the Crucifixion.
The fourth picture is of the medieval octagonal font. It has an octagonal stem and base, and carvings on the bowl panels. The wooden font cover is modern, having been installed in 1956 in memory of former Sunday school teacher Hannah Edmunds.
The final photograph is of a 15th century bell which is hung outside of the church under a small, tiled gable roof. It was taken down from the belfry in the 1930s because of concerns that the timber bell frame could no longer support the weight of 2 bells.