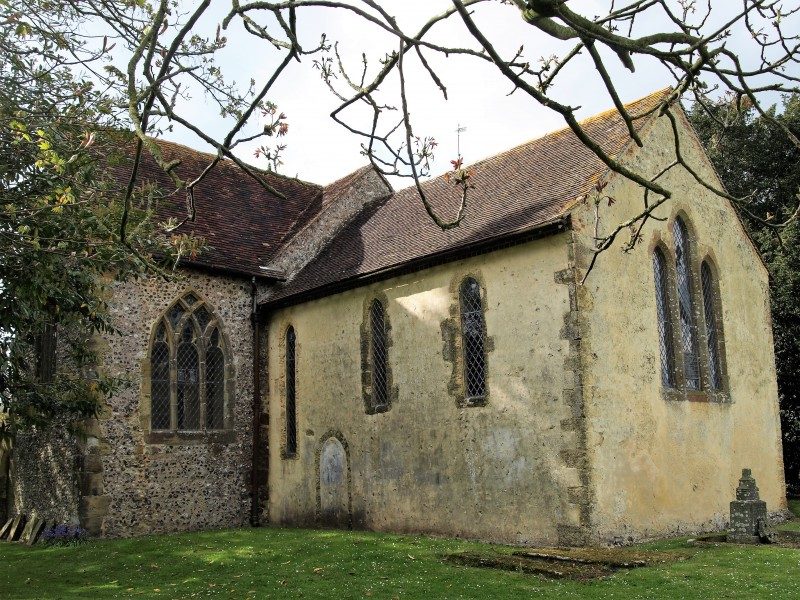 Two small splayed windows in the nave at St Mary’s date this part of the church to the Norman period, and it is probable that this was the church recorded in the Domesday Survey of 1086.
A chancel was added in the mid 13th century, and towards the end of that century, c1290,  north and south transepts were added, creating a cruciform building. A belfry straddles the ridge of the north transept.
The church was made redundant in 1992, and is now under the care of the Churches Conservation Trust.
The main photograph above shows the chancel from the south-east with low-side window and priest’s door, and the east elevation of the south transept.
The first picture in the gallery is a view of the north elevation of the nave, with, far right, the buttressed north transept and weather-boarded belfry. The doorway has a pointed arch head, and is therefore not original.
The next photograph shows the west wall of the nave, the south porch and part of the south transept. The three-light west window is a typical example of Early English architecture.
The third picture is of the east end of the chancel. The 3-light east window is also Early English in style, but is a 20th century replacement.
The fourth photograph is of the nave looking east. The chancel arch, built of clunch, is early 14th century, and the next two photographs show contemporary (14th century) wall paintings over the arch, and one of the recesses either side of the arch. There are also smaller recesses or niches in the chancel arch responds. These would have originally held statues of Saints.

The first picture in the second gallery shows the chancel south wall, with a triple sedilla and piscina. Two of the three sedilla have plain arch heads, whilst the third and the piscina have trefoil heads. However, there is a continuous outer roll moulding over all four indicating that it is all 13th century work.
Next shown are the stalls on the north side of the chancel. These feature some original medieval carving.
The third photograph is of one of two image brackets on either side of the chancel east window. They have ornate foliage carving, and the underside of the corbels have small carved faces.
The next two photographs feature the south transept which has an unusual seat/sedilla arrangement under two blind arches on the west wall. The arches meet in the centre with a carved corbel depicting a sheep’s head. There is a piscina in the south wall indicating that this was once a side chapel with its own altar under the east window.
The next photograph in this gallery is of the Pulborough sandstone font. It is shaped rather like a chalice, with lead lining, and dates from the first half of the 13th century.
One of two Norman windows in the nave is shown next, followed by a 3-light Decorated Gothic style window in the east wall of the south transept. This window includes three reset pieces of ancient stained glass. Finally shown is a 2-light window in the north wall of the north transept. Showing in the picture is the bell rope for ringing the single bell set in the belfry on the north transept roof.