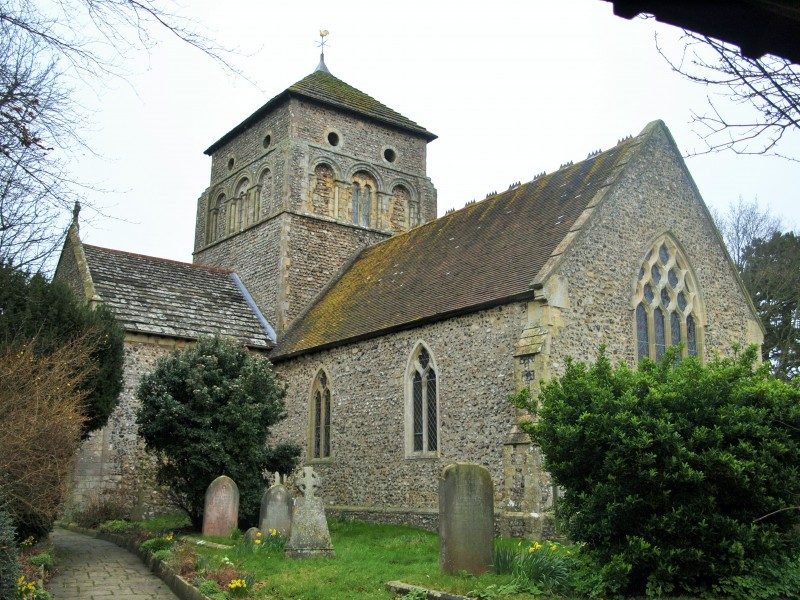 The Saxon walls of the nave of St Nicolas remain, and there is a blocked Saxon doorway towards the north-west end of the church. This originally led into a Saxon tower at the west end of the nave. In the 12th century, c1140, the Normans built a new tower at the eastern end of the nave and demolished the old Saxon tower. North and south transepts were added, and together with an apsidal chancel, this gave the church its cruciform shape. Smaller apses were added to the eastern ends of the two transepts.
The first picture in the gallery above shows the Norman tower with its three semi-circular arches and two round sound holes on each side. This latter feature is very rare in England.
Next is a picture of the chancel seen through the east crossing arch. The carved oak Rood Screen dates from c1300. The east window has glass from the Great Exhibition of 1851, and depicts the Saints Wilfrid, Mary, Richard and Nicolas, to whom the church is dedicated.
The third picture in the gallery is of the south window in the chancel, nearest the crossing. The glass dates from 1882. Top left is St John Chrysostom, top right depicts St Augustine, bottom left is St David, and bottom right is St Margaret.
The painted ceiling is Victorian.
The most impressive architectural part of the Church of St Nicolas is the crossing, the four mid 12th century arches below the tower, being some of the finest Norman work in Sussex. The internal sides of the chancel arch and the transept arches, facing into the crossing, have highly decorative carvings, whilst the sides facing the chancel and transepts are largely plain. The west side of the west arch is also finely carved, enhancing the view from the nave through the crossing towards the altar. All of the arches have three demi-shafts, with cushion and scallop capitals. The two orders of the round arches are separated by a roll moulding.

The view through  the west and east crossing arches is shown in the first photograph in the gallery above. Next shown is the south transept side of the south crossing arch looking through towards the north transept. The west arch seen from the crossing is similarly largely plain, as seen in the third photograph. The fourth photograph shows, in comparison, the highly ornate west side of the arch to the chancel from the crossing. The inner order of the semi-circular arch has a row of alternating upright and inverted triangles. Next there is a roll moulding, and then an order carved with a triple chevron. The outer course is carved with rosettes surrounded by, and joined with, zig zags forming a ‘daisy chain’ pattern.
Other carvings include an elf, a cat’s face, and at each end of the north arch, human faces, postulated to depict perhaps King Stephen and his Queen, Mathilda.