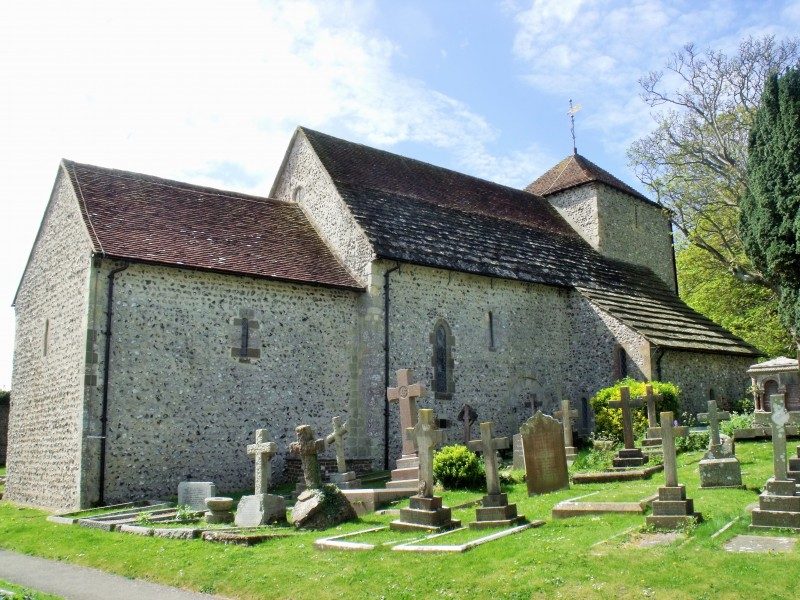 St Wulfran’s at Ovingdean is one of only two churches with this dedication in England. The nave and chancel can be dated to c1100, but an earlier church did exist here, evidenced by its inclusion in the Domesday Book.
St Wulfran’s was built almost entirely of flint, the most abundant local building material on the South Downs. The tower was added c1216, just after the end of the Norman era. The rather incongruous chimney was added in the late 19th century, and then rebuilt in 1953.
There are three semi-circular arches leading from the nave through to the chancel, the two smaller outer ones having been added in the 17th century. Above the central arch is a rood of carved wood showing Christ on the cross, flanked by the Virgin Mary and  John the Apostle.
The rood was worked by Bavarian woodcarvers in 1907.  It was designed by The Kempe Studio for Stained Glass and Church Furniture. Charles Kempe had been responsible for the church restoration in 1867, and for much of the stained glass in St Wulfran’s. Charles Kempe’s work became famous and culminated in providing a stained glass window for Buckingham Palace.

The chancel at St Wulfran’s, showing the painted ceiling which was also designed by Charles Kempe.
The reredos, behind the altar, is probably 14thcentury. The east window is Norman and is flanked either side and above by paintings on wood panels, the former dating to c1892 and those above, depicting St Wilfred and St Richard, to c1960 when they were painted by local resident,
Maude Bishop.

The original Norman doorway (above right), now blocked, is in the north nave wall. To the right-hand lower corner is a recess which was a holy water stoup used by worshippers on entering the church through the then main entrance. There is a section of moulded arch set into the nave north wall near to the chancel arches. It is probably medieval, but its origin and use are unknown.

The original 15th century bell-wheel which is now unused, is mounted high up on the internal east wall of the tower