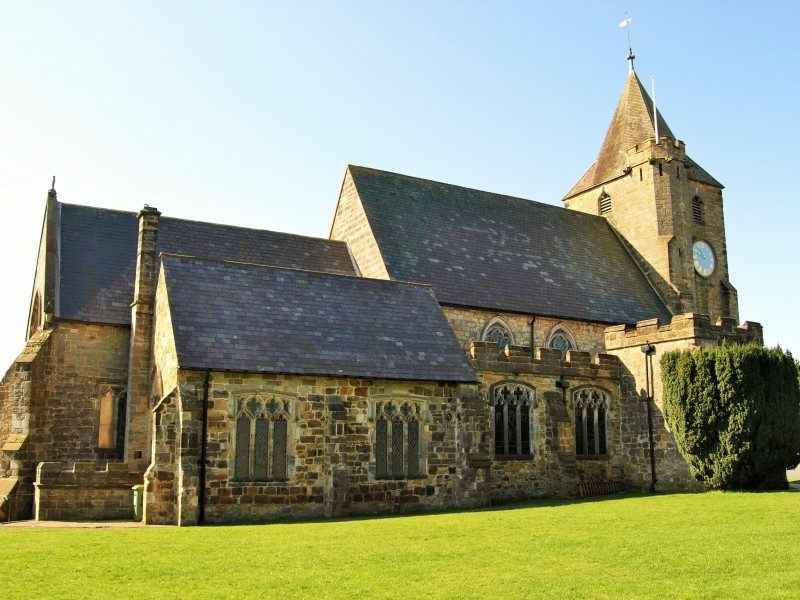 The list of vicars displayed in St Mary’s, Ticehurst shows the first named to be Adam, ‘Presbyter de Tychenherste’ and the start date of his incumbency as 1180. There is nothing now remaining of that early church, the majority of the present building dating to the late 14th century.
The chancel had to be rebuilt in 1856, but it was carried out sympathetically, to the original style.
The rather ornate piscina is in the south wall of the chancel. The octagonal font, of unknown date, has a 16th century carved oak canopy with folding doors.

Chancel stained glass, shown in the gallery. Historically most interesting of the three windows shown above is the one in the north wall of the chancel. It is one of the four most important historic stained glass windows in the country. The Last Judgement or ‘doom’ depiction contains fragments of medieval glass dating back to at least 1452.
The large east window, including various scenes of the Passion of Christ, is also important, containing a central light which won a prize at the 1878 Paris Exposition.
On the right, the two light south chancel window depicts The Virgin Mary and St John.

The north chapel contains memorials to the Courthope family who lived at Whiligh between 1512 and 1980. Also displayed in the Courthope chapel are a funeral bier which was used until after the 2nd World War, and a Sussex farm worker’s smock.
The last photograph in the gallery is of a carved stone head which resides in the squint of the Pashley (south) chapel. There is another carved head in the porch.