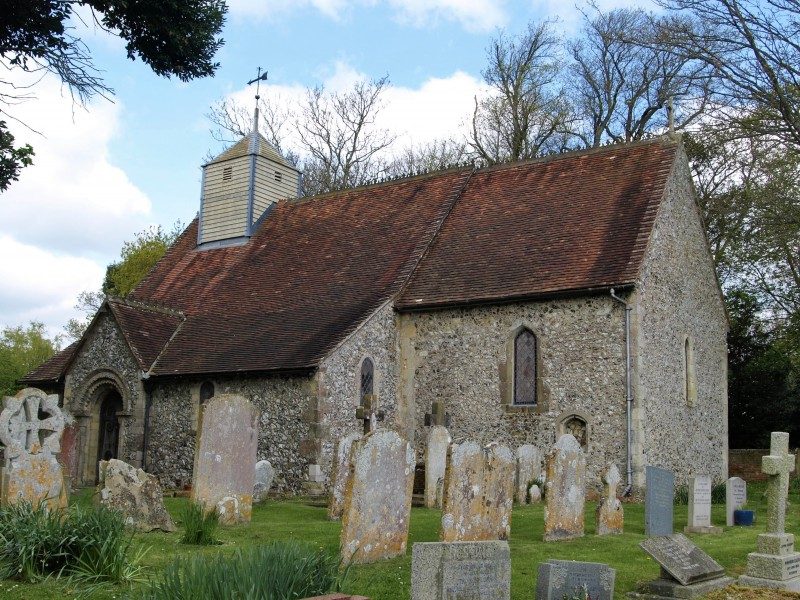 The church of St Mary Magdalene at Tortington dates from the middle of the Norman period, c1140. It is constructed of flint from the South Downs with quoins of Caen stone imported from Normandy. The original building consisted of a nave and chancel only, and despite later alterations, much of this Norman work remains. The north and west walls of the nave, and the north and east walls of the chancel, are extant with just the usual fenestration changes. A south aisle and south chapel were added in the 13th century, but were demolished sometime during the following centuries. The Victorians rebuilt the south aisle at the time of general restoration work in the 1860s, but the chapel was not replaced. There is a 16th century white painted weatherboard bellcote and a modern north vestry.
The first picture in the gallery above shows the 12th century south doorway which retains the original Norman masonry despite having been reset three times, firstly when the 13th century south aisle was added, then when the aisle was demolished, and then finally when the ‘new’ south aisle was built. The semi-circular arch consists of three orders, the inner having plain chevrons, the second also of chevrons but with bunches of grapes between the chevrons, and the outer order with a quatrefoil pattern.
The second photograph in the gallery shows the south wall of the chancel, the blocked opening being a piscina or aumbry, evidence of a former south chapel. The other window is a 13th century lancet.
The third photograph, taken across the nave shows the mid-12th century chancel arch, two 18th century funeral hatchments above the arch, the 17th century oak pulpit, and some of the extant medieval roof timbers of the nave.
Next shown is a closer view of the west side of 12th century chancel arch, which bears unusual decorative carvings. Known as ‘Norman beakheads’, they are almost pagan-like in form, with staring eyes in various weird heads that seem to threaten the onlooker. The keystone is engraved with the Leeves family coat of arms on the west side, and ‘W F Leeves 1750’ on the east side, indicating that this was probably the date of a repair to the arch paid for by the Leeves family. The nook shaft capitals are carved with foliate decoration.
The firth photograph shows a memorial floor slab with a Celtic cross. Unfortunately there appears to be no sign or record of a dedication.
Finally in this gallery, is a photograph of the unusual Caen stone ‘tub’ font, which dates from the 12th century. The font is carved with an arcade of round arches carrying foliate designs, and the rim is decorated with a cable moulding.
A feature of St Mary Magdalene, Tortington is the fine stained glass in the lancet windows. Some of this is shown in the gallery below. The first photograph is of the chancel east window with stained glass from 1836 depicting the Lamb of God, the Holy Trinity, and the 4 evangelists’ symbols in the roundels. The next two photographs are of glass depicting St Richard of Chichester and St Mary Magdalene. The stained glass was installed in 1896 in the two north nave windows.
Next is the west window in the nave, and finally another lancet in the south wall with glass by Thomas Willement installed in 1936, contemporary with the Lamb of God window.