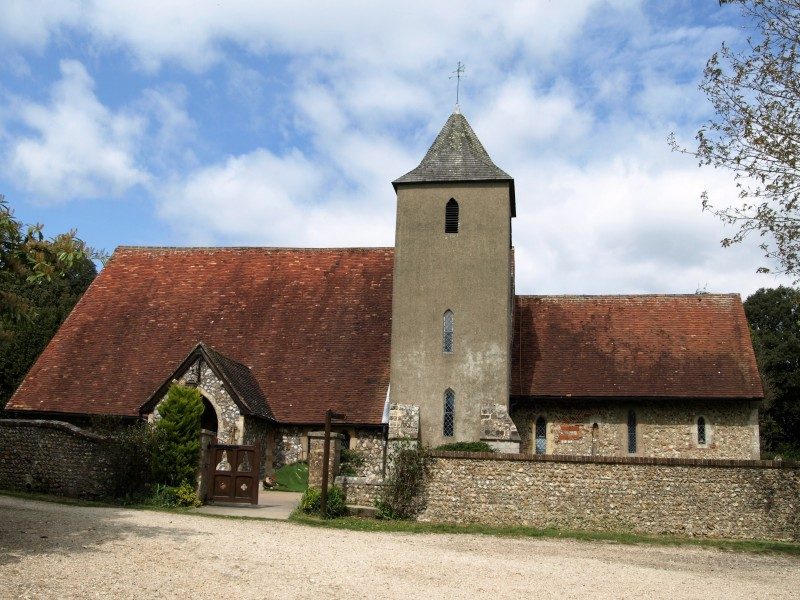 The church of St Peter at Westhampnett stands alongside the Roman road, Stane Street, and the extant Saxon walls of the chancel include Roman bricks laid in herringbone fashion, and a blocked Saxon window. This first stone church at Westhampnett may date back as far as the early 8th century following St Wilfred’s mission the previous century to convert the people of Sussex to Christianity.
The first picture in the gallery above shows part of the ancient Saxon south wall of the chancel, built with a conglomeration of Roman bricks laid herring-bone fashion, flints and rare Roman hypocausts (flue pipes), some inscribed with the maker’s mark. To the east of four of the hypocausts is a tiny blocked Saxon window. Two other lancet windows in the photograph, one of which is a ‘low-side’, are 13th century, inserted when the chancel was extended.
The second photograph shows the Norman Transitional nave, looking towards the ‘weeping’ chancel. It replaced a Saxon nave c1190 -1200. The original Saxon chancel arch and wall were taken down in 1867 and replaced with the gothic style arch now seen. The Saxon arch was constructed of salvaged Roman tiles on stone imposts with jambs of typical ‘long and short’ masonry work.
The third picture was taken in the nave looking in the opposite direction to the west wall. The stained glass in the 3-light west window was installed in 1886, and depicts the Saints Faith, Hope and Charity.

The first picture in the second gallery is of the ancient north doorway which has been reset in the north aisle and now leads into the vestry. The arch over the door  is pointed and probably 14th century. The rere arch is semicircular and bears three shields with the Tawke family arms, the central one being impaled with three bugles.
The next photograph shows the niche tomb of Richard Sackville. This monument is set in the north wall of the chancel and dates from the 16th century. The back of the monument shows Richard and one son, and his wife Elizabeth and one daughter, flanking a representation of the Holy Trinity, unfortunately much defaced. The whole sits under a depressed Tudor arch.
Shown in the next picture, on the opposite side of the chancel, in the south wall, is a 13th century trefoil headed double piscina with credence shelf.
The fourth photograph in this gallery is a view of the base of the tower viewed from the south aisle. This part of the tower is late Norman, and was unusually positioned at the south-east corner of the nave. The second stage of the tower is 13th century, and the third is modern, having replaced an earlier timber structure. The next picture is of a 15th century image niche with cinquefoil head in the east wall of the tower base.
The final photograph is of the octagonal font which is a rare example of a font which dates from towards the end of the Elizabethan era.