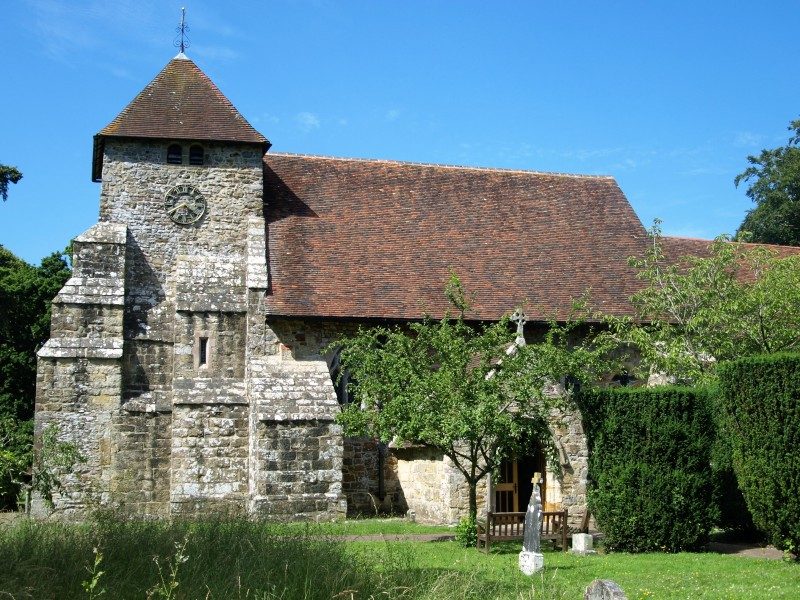 The nave and western part of the chancel were built in the early 12th century. The chancel arch survives from this time, and has the typical Norman architectural features of responds with angle shafts and foliage capitals, and a roll-moulded outer order to the semi-circular arch. The west tower was added in the late 12th century, and the chancel was extended eastwards in 1251 when the living was granted to Battle Abbey. The squints either side of the chancel arch were probably inserted at the same time, as they are set at an angle to allow a view of the new altar position.
A south porch was built, and fenestration changes were made in the 14th century. Further alterations were undertaken  in the  17th century, including reducing the height of the tower, presumably to alleviate problems with decay or instability. It is likely that the hipped ‘Sussex Cap’ was added at the same time, as it appears to sit below the original height of the double bell openings.
A sundial on the south porch bears the date 1626, and was therefore added long after the porch was built. A further early 17th century date, 1624,  is marked on masonry just above the south buttress, at the west end of the nave. Buttressing to alleviate stability problems at the tower had actually been commenced in the 13th century.
In 1861 a north aisle was built, the arcade arches being constructed in Norman style.

The third photograph in the gallery above shows the pulpit which was constructed from Jacobean pews. One of the hagioscopes can be seen to the left of the pulpit, and part of a 14th century window to the right. This window was glazed in 2000 to mark the millennium, and features, symbolically, Christ on the right and St John the Baptist on the left.

The fourth photograph shows the  altar and reredos, which was installed in 1935. The beautiful wood reredos is carved with figures depicting the Archangels Gabriel and Michael either side of Christ.
The circular east window was glazed in 1933 by Veronica Whall, and is of The Madonna and Child.