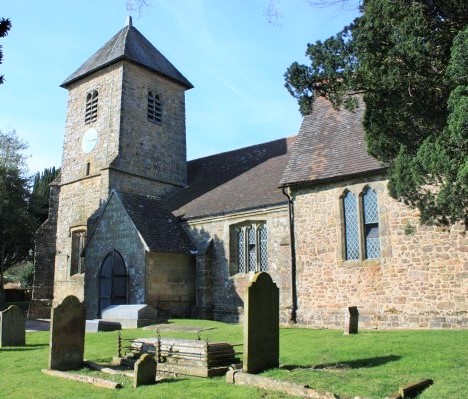 Church of St Peter and St John the Baptist

The sandstone church at Wivelsfield, almost certainly a  replacement for an earlier wooden church, was built c1050, when it consisted only of a 27 feet long nave and small chancel. The oldest remaining feature of that building is the typically Saxon north doorway, shown in the gallery below, first picture. The semi-circular arch is reeded and has a hood mould. It is tall (allowing Saxon processional banners to be carried through), and narrow ( to prevent entry by the devil). The proportions of the doorway can best be seen from inside, as the external ground level is significantly higher than the internal floor.

Above in the gallery, top row, are illustrations of the developing architectural style of the piscinae and aumbry at St Peter and St John the Baptist church.
Left is the piscina in the chancel, set to the right of where the altar stood before the chancel extension. The pointed arch to this piscina is indicative of the Early English Gothic architecture of the 13th century.
The aumbry (centre) and the other piscina (right) are in the south chantry chapel, and are probably 14th century, the style having developed to include trefoil heads.

The porch is Victorian, built onto the wall of the south aisle which was added  c1500. There is a Holy Water stoup, sadly damaged, set to the right of the doorway.
The fourth gallery photograph shows one of the head-stops of the south doorway square hood mould. These feature grotesque carvings, this one, on the left of the doorway, being upside down.

The fifth picture in the gallery is of the circular font which is thought to be Victorian, and the last photograph shows the pulpit, originally 17th century, but later substantially altered, the base now being formed from the original tester (canopy).