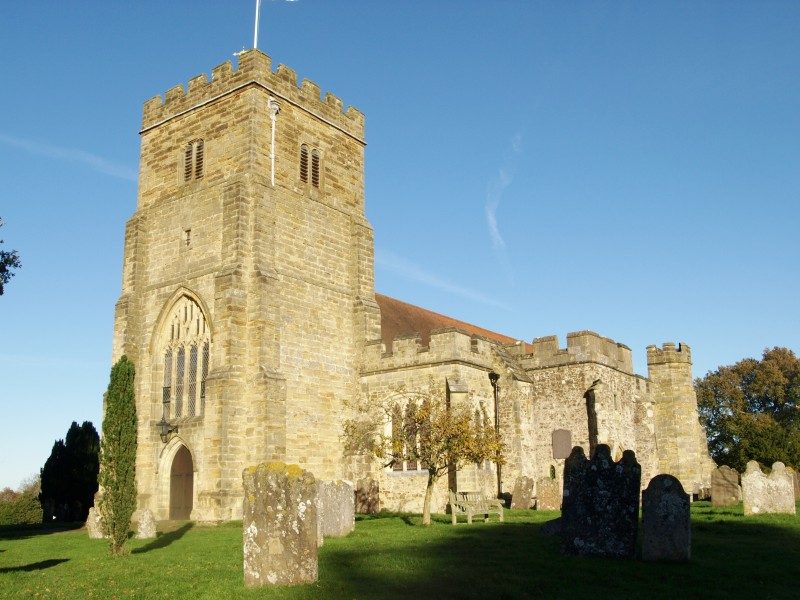 St George’s, Benenden was rebuilt during 1677-1678, after lightning in a severe thunderstorm on December 30th 1672 set fire to the steeple, destroying the roofs and timber parts of the church in a fire that lasted some 4-5 hours. Five neighbouring houses were also burnt to the ground, and the intensity of the fire even melted the church bells.
Much of the current interior dates from 1861, when extensive renovations and alterations were undertaken. The oldest remaining part of the church is some 12th century stonework  near the foot of the tower stairs, probably part of the Norman west wall of the church, although the existence of an earlier building is evidenced by a reference in the Domesday Book of 1086.

The chancel east window was reconstructed in perpendicular style during the 19th century, as part of the redevelopment works commissioned by Gathorne Hardy. Hardy was a Conservative politician who became Home Secretary, Secretary of State for War, and Secretary of State for India, and later 1st Earl of Cranbrook.. The stained glass is in memory of Gathorne’s father and mother, and shows Scenes from the Passion. The mosaic reredos behind the altar commemorates the golden wedding of the 1st Earl and Countess of Cranbrook, and is of The Holy Family with Angels adoring.
There are various other memorials to the Hardy family in the church, including brasses and further stained glass in the Lady Chapel.

The second photograph in the gallery is of the Lady Chapel east window. The stained glass depicts four biblical marriage stories to commemorate John Stewart Hardy’s marriage in 1867.
The stories are: The marriage feast in Cana, Isaac and Rebecca, Jacob and Rachel, and Ruth and Boaz.
St. George’s Church has three small spiral staircases. The former rood loft had a staircase to access candles to illuminate the Great Rood. This staircase is built in an octagonal turret along the south wall of the church. Another small stone spiral staircase gives access from the ground floor tower area to the bellringers gallery and clock. A third winding staircase gives access to a chamber called a parvis(e) above the porch. A parvis in medieval churches had various uses, ranging from a prison, as at Cranbrook and Newenden churches, to a simple storeroom, the current use at St George’s.
The central ceiling boss to the vaulted roof of the 15th century north porch is decorated with a carved salamander. Salamanders were supposed to be blessed with eternal life, and were long used in catholic churches as symbols of immortality and the resurrection.