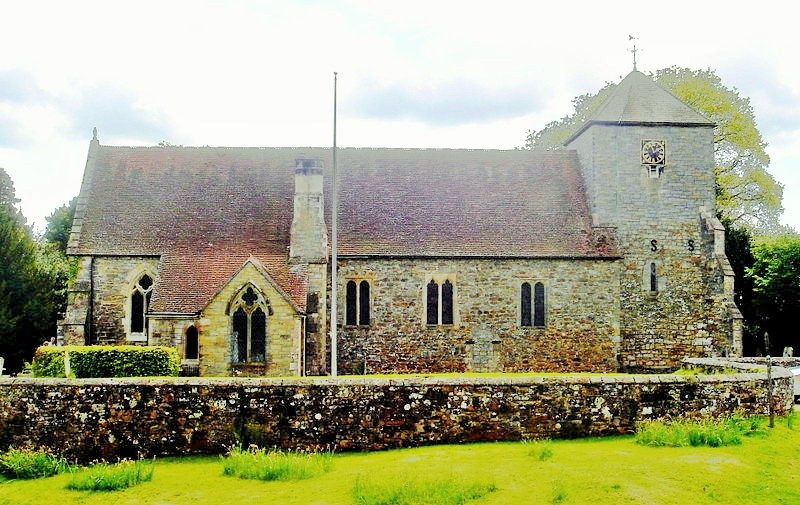 The main photograph is of St Mary’s, Slaugham from the north, showing the oldest extant part of the church, the north wall of the nave, with the blocked Norman doorway visible between the first and second windows from the right.
The church was extended c1290, when the squat tower was built, along with the current chancel, a south aisle, and a vestry (now the organ chamber). Closest to the camera is the new vestry which was built on to the organ chamber in the 19th century. The Victorians also enlarged the south aisle and built a new south porch.
The first two pictures in the gallery below show the Norman doorway, dating from the early 12th century, from outside and inside.
The third photograph is of the 13th century chancel. The stained glass in the east window is the earliest in the church, dating from 1866. It includes depictions of the Crucifixion. Either side of the east window are gilt figures of St Mary the Virgin and St Richard.
The fourth picture in the gallery above shows the fine alabaster reredos behind the altar, with carvings of ten saints, five either side of Jesus.
The next two photographs are of windows in the west wall of St Mary’s. The small lancet has glass depicting St Richard of Chichester. The other window unusually features, along the bottom in the trefoil lights, representations of objects associated with the Crucifixion. From left to right, they are: A spear; the crown of thorns; three nails; and dice (used by soldiers to gamble on who would get Christ’s clothes).
The first picture in the gallery above shows the pulpit, which is thought to be by Flemish craftsmen, possibly dating to the Elizabethan era.
Next shown is the Sussex marble font, which is late Norman. The square bowl sits on a large circular central column with four colonnettes at the corners. The bowl faces are carved, the one shown here being a fish, which was an early Christian symbol, latterly adopted by some Christians and used as a car emblem.
The last three photographs are of the south chapel, which was built by the local Covert family in 1613. A Covert family vault was discovered in the floor of the Covert Chapel during 2007 repair work.
Shown first is a fine stone monument, on the chapel south wall, to Richard Covert (d. 1579). Next, a brass memorial, on the chapel east wall, is to Sir John Covert (d. 1503).
Finally, the photograph is of two further monuments to Covert family members in the chancel. They are to an earlier Richard (d. 1547), and his grand-daughter Jane (d. 1586).