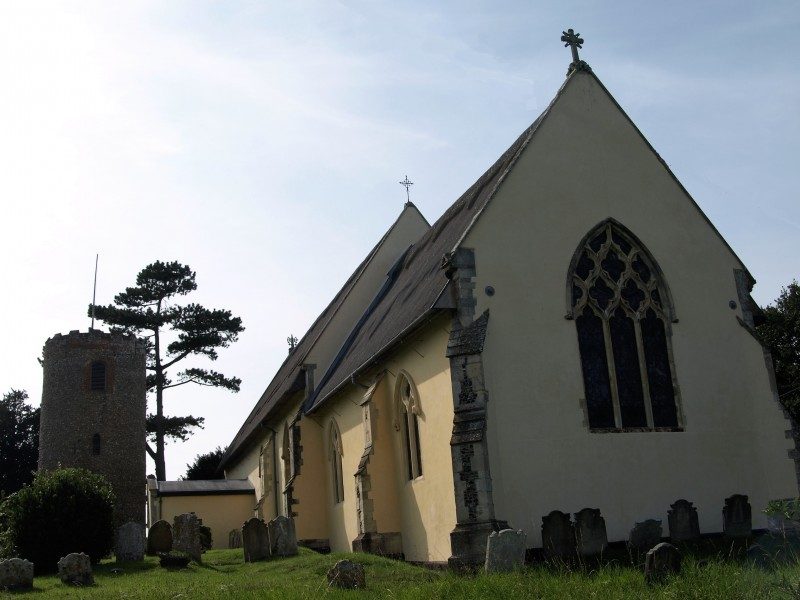 The church of St Andrew at Bramfield is a lovely thatched building in itself, but is set apart from others by its rare detached tower. The flint built Norman tower, perhaps originally built as a fortified structure for the local people, is the only detached round tower in Suffolk. The other detached church tower in Suffolk is at St Michael’s Church, Beccles, but that one is square and dates to the early 16th century, and is perhaps not as picturesque as Bramfield.
Another round Norman detached tower at St Andrew’s Church, Little Snoring in Norfolk, was originally attached to a church building, which was later demolished and then replaced by a new building a few metres apart from the tower.
St Andrew’s, Bramfield consists of a nave and chancel under thatched roofs, a south porch, and a north vestry. It underwent a sympathetic Victorian restoration in 1870.

The first photograph in the gallery below is of the church from the south-east, showing the restored thatch over the nave. Next shown is a view of the nave looking east. The rood screen is of particular note, dating from c1500 with the fine original carving still intact, only the top canopy having been renewed.
The third photograph is of two of the medieval paintings on the lower panels of the rood screen. The two shown are on the north side of the central arch, and depict St Mark and St Matthew. On the south side there are three more paintings, these depicting Sts Luke, John and Mary Magdalene.
The fourth photograph is a medieval wall painting in a recessed arch in the north nave wall. The painting features a large white cross surrounded by four angels. (A framed dialogue in the church gives a more detailed description).
The next two photographs show stained glass windows in St Andrew’s. First shown is a 2-light window in the north wall of the chancel, dedicated to Bridget Nelson (1672 – 1731). The second photograph is of the chancel and includes the 14th century east window with Victorian stained glass dedicated to Nicholas and Elizabeth Simons.

The second gallery starts with a photograph of the splendid Coke memorial. The recumbent figure of Elizabeth (d.1629), wife of Arthur Coke, lies on a marble tomb chest, with Arthur (d.1627) depicted kneeling in a recess above her. The family coat of arms is at the top, and there are 3 cartouches down each side, and a further one at the bottom.
The second photograph shows the south-east corner of the chancel. The finely detailed reredos, dating from 1867, extends fully across the east wall with returns to the north and south. It incorporates figures of four saints set in canopied recesses, and a sedilia on the south wall.  It was installed with funding from a local resident in memory of her parents.
Finally shown is the octagonal font which has quatrefoil designs around the bowl and columnettes around the stem. It was re-cut during the Victorian restorations.
Further reading:
The Guide to Suffolk Churches