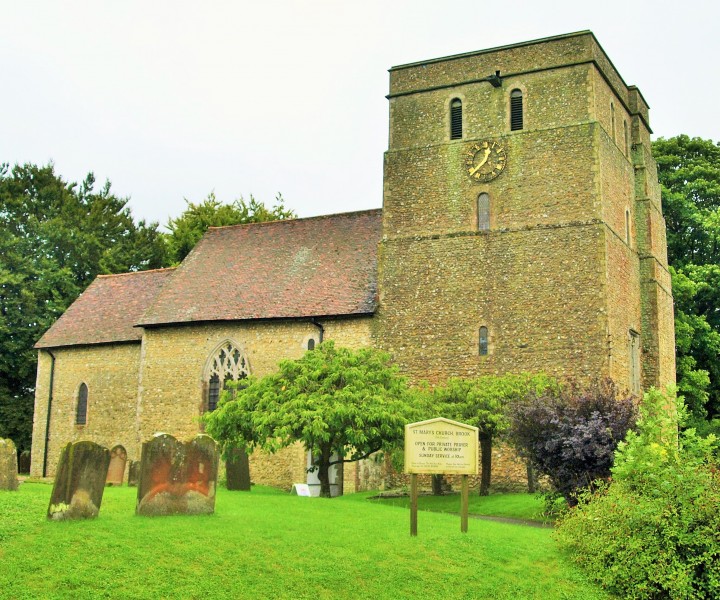 A church at Brook was recorded in the Doomsday survey of 1086. Ten years earlier Archbishop Lanfranc had assigned Brook to Christ Church Monastery, Canterbury, and the church remained in the ownership of Canterbury until the dissolution of the monasteries by order of Henry VIII in the 16th century.
St Mary is a fine example of a virtually unaltered early Norman church. There is no evidence of any former Saxon building on the site.
The tower is massive compared to the rest of the church. It has three storeys, the central one being a room for priests when visiting from Canterbury to oversee the workings of the church and manor.
The first photograph in the gallery below is view of the nave looking west. Above the tower arch, the two windows allowed the priest to see down into the main body of the church. There is a 12th century mural (the earliest in the church) of Christ in Majesty, in the Priest’s Room.
The tower is normally locked, but access can be arranged by prior appointment.
The second picture shows a general view from the nave looking east. The interior is largely unaltered apart from changes required at the Reformation. The part blocked opening to the left of the late Norman chancel arch would have been for access to the former rood loft.
The third photograph shows a painting in the nave, above the north door. It dates from the 14th century, and depicts St Christopher carrying the Christ child on his left shoulder.
The second gallery below contains closer views of the chancel showing the medieval stone altar slab which was removed at the Reformation, and only reinstated in 1986, 20 years after being discovered buried in the churchyard, and the wall paintings for which the church is famous.
The medieval wall paintings either side of the chancel east window are, apart from the 1190 painting of Christ in Majesty in the tower priest’s room, the earliest murals in the church, dating from between 1250 and 1260. They are among the most important such paintings in the country. The scenes are painted in roundels, some 2 feet across, in alternating colours of black on white, and white on black, although the black would have originally been a vivid red, making the murals even more striking than they are today.
The biblical scenes extend around the chancel north and south walls, and depict the Nativity, Ministry, and Passion of Christ.

The final gallery below shows interesting items in the chancel at St Mary’s. First and second photographs are of the hagioscope through the north chancel wall, viewed from inside and outside respectively. There is no trace of the anchorite’s cell which the hagioscope would have served. Last, is a photograph of the 14th century floor tiles on the chancel floor.