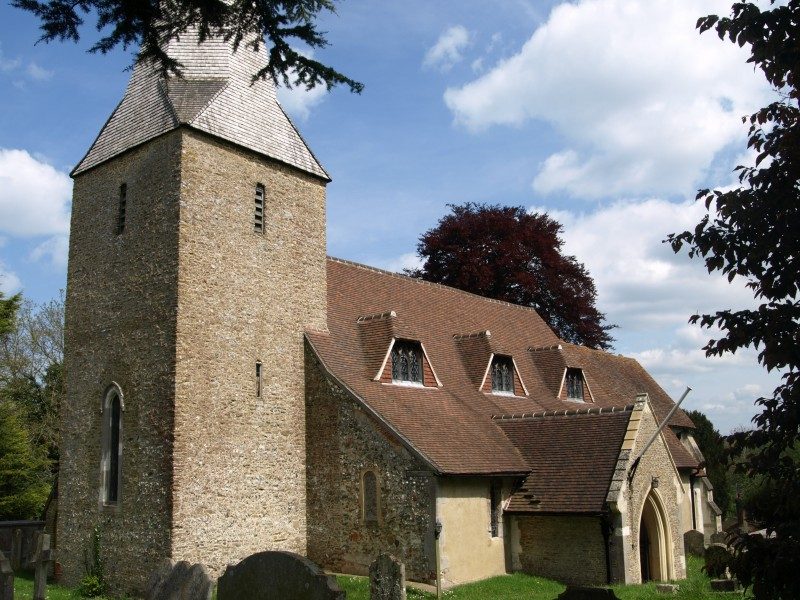 Of all of the parish churches in the south of England, perhaps in all England, this must be the most interesting for the visitor. St Nicholas is tucked away up a short footpath in the centre of the pretty Surrey village of Compton, just off the Hog’s Back. The church retains Anglo-Saxon masonry to the tower and the west wall of the nave (seen in the foreground of the featured image above).
The crowning glory, however, is Norman, the unique two-storey sanctuary having been built in the 12th century. It is the only one in England that remains intact, with access via a timber staircase on the south side.
The first two photographs in the gallery above are views of the two-storey sanctuary, the first seen through the semi-circular chancel arch with its typically Norman chevron decoration.
The low curvature sanctuary arch dates the construction of the upper sanctuary to c1180, the arch being finely decorated with a scalloped inner ring and a dog-tooth outer border.
The appearance of the whole ‘double’ sanctuary is most impressive. The vaulted ceiling of the ground floor sanctuary frames the altar table with east window beyond. The 13th century stained glass in the east window depicts the Virgin and Child. There is a Norman piscina and an aumbry.
The lower balustrade is Jacobean c1620, but the upper one is Norman, c1180 and is most important, being the oldest extant decorative timberwork in the country. The third picture is of  the upper balustrade. The balustade arches and top rail are made from a single piece of wood, some 13 feet long by nearly 1 foot deep. The complete balustrade appears petrified, almost feeling metallic to the touch.
The first picture in the gallery above is showing a general view from the nave looking towards the chancel. The wall decoration over the chancel arch was restored in 1966 and is thought to date to the 15th century. There is evidence of probably two earlier layers of wall painting on the chancel arch, the earliest being pre-Norman. Most of the walls at St Nicholas were previously decorated with murals, although no others have survived. The chancel arch painting is of stepped cubes in perspective, and would have been a background to the rood.
The second picture is of the east window in the chancel, and the third shows the south wall of the lower chancel with early Norman piscine and aumbry. Above the aumbry there is a hagioscope.
The first photograph above shows the other side of the hagioscope. There is a direct view of the altar through the hagioscope from the small chamber which is thought to have been used by a hermit.
Next, is a photograph of some rare ‘Crusader graffiti’ on the south column of the chancel arch. The image of a knight and a cross dates from the early 12th century and is protected by a transparent plate.
Finally, the font is also 12th century, and is made from carrstone, a sedimentary sandstone found locally in the Lower Greensand area south of the Hog’s Back.