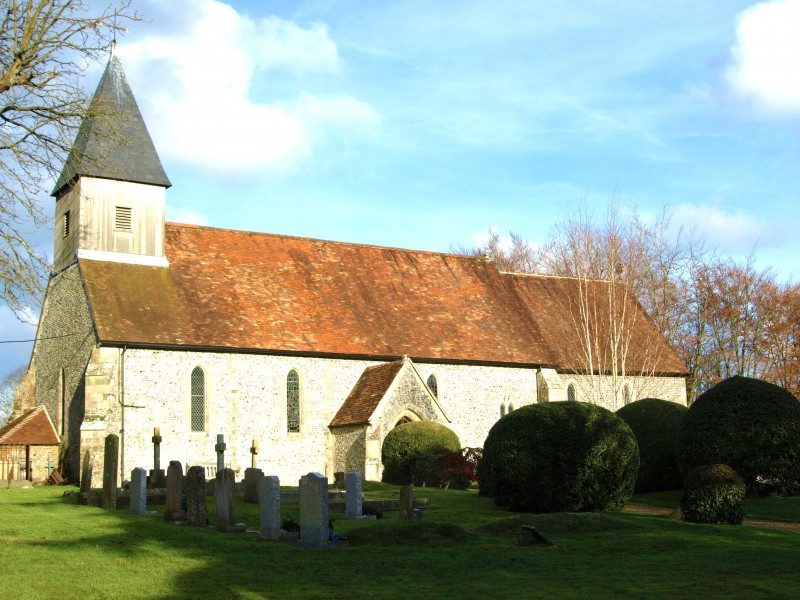 St Peter and St Paul’s Church at Exton was built in the 13th century on the site of an earlier church which had been built in 940 next to the River Meon. Exton is in the east of the area which was held by the West Saxons with their capital at Winchester. (East Saxon Town or Essessetun in Domesday eventually contracted to Exton).
The church has what is known as a ‘weeping chancel’ with the chancel and nave being out of alignment, and either one or both being offset from a true east-west orientation. At Exton this is more pronounced than at many other churches with weeping chancels, and, unusually here, the misalignment is to the south.
Built at different times (the chancel c1230 and the nave 1350), the foundations for the two sections of the church would have been marked out on different days of the year, with the sunrise, used to indicate east, being at  different points on the horizon.
Weeping chancels are also often taken to symbolize the position of Christ’s head on the Cross.
One of the features of St Peter and St Paul’s, is the wall painting of the ‘Tree of Life’, around the east window of the chancel. The stencilled wall painting was designed by Charles Spooner in the 1890’s when he also designed the stained glass windows. Charles was the cousin of the Rev W. Spooner of New College, Oxford after whom ‘spoonerisms’ were named when he often unintentionally misplaced letters or syllables in his speech resulting in comic outcomes such as ‘you hissed my mystery lesson’ instead of ‘you missed my history lesson’.
The wall painting was covered up in the 1920’s during work to rectify damp, but was rediscovered in 1995 when redecorating was carried out, and it has now been fully restored.

The church also has a number of 18th century wall monuments. One of these, (shown in the gallery above), depicts the Angel of Death summoning the scholar from his books. The inscription which is rather worn and difficult to read dates the memorial to 1780.
The webmaster assumes that this is the good Angel of Death, the Archangel Michael, rather than the evil Angel of Death, Samael, but discussion of this is really beyond the scope of this website.