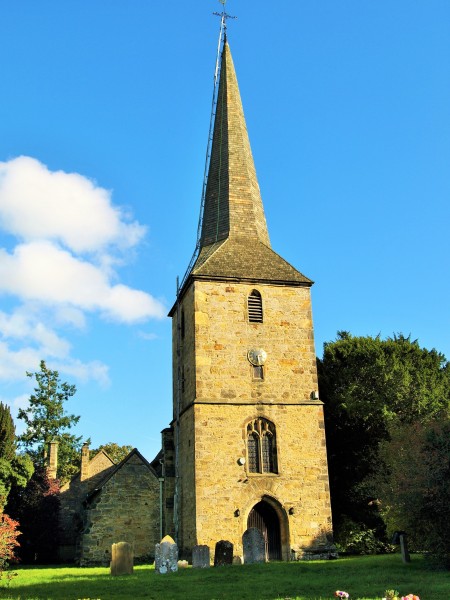 Records compiled between 1115 and 1125 and held now at Rochester Cathedral library show that a Norman church at Hever was consecrated during that period. Standing immediately next to the Hever Castle estate, the oldest extant parts of St Peter’s are sections of the nave and north aisle which date to 1292. Before this, construction of a castle at Hever had begun, the gatehouse and walled bailey there dating to 1270.
The main photograph above shows St Peter’s from the north-west. The tower dates from the 14th century, as do the south walls of the nave and chancel, and the east wall of the chancel.
Circa 1450 the Bullen Chapel was added to the north of the chancel by Geoffrey Bullen, father of Sir Geoffrey Bullen, a wealthy mercer who rose to be Lord Mayor of London and was knighted by King Henry VI. Sir Geoffrey’s son, Sir Thomas Bullen continued to raise the status of the Bullen family when he married Lady Elizabeth Howard the eldest daughter of Thomas Howard, 2nd Duke of Norfolk. A diplomat and politician, Sir Thomas Bullen became 1st Earl of Wiltshire and of Ormond, and Lord Privy Seal. He was made a Knight of the Bath at Henry VIII’s coronation in 1509, and Knight of the Garter in 1523. His younger daughter Anne Boleyn became Henry VIII’s second wife, therefore making Thomas the grandfather of Queen Elizabeth I.
Anne Boleyn was brought up at Hever Castle before finishing her education in the Netherlands and France, and there is little doubt that she would have worshipped at St Peter’s during her early years.
The first photograph in the gallery above is of the 15th century perpendicular gothic east window to the chancel. Shown next is the Bullen chapel east window. The modern (1986) stained glass is in memory of Gavin, 2nd Baron Astor who died in 1984. The right hand of the three lights incorporates some fragments of ancient glass.
The third and fourth pictures in the gallery are of the most important item of the Bullen chapel, the tomb of Anne Boleyn’s father Sir Thomas Bullen, who died in 1538. The tomb carries a fine brass depicting Sir Thomas in the robes and insignia of a Knight of the Garter. He has the badge of the Garter on his chest and the Garter around his left knee. A falcon, the Bullen family crest, is above his right shoulder, and a griffin is at his feet.
The chapel is unusual in that it has a Tudor fireplace in the north wall.
In addition to the Thomas Bullen brass, said to be one of the finest in the country, there is also a small memorial, in the floor of the chancel, to Thomas’s son Henry who died in infancy.
There are two other exceptional brasses in the chancel. The fifth photograph is of the brass to William Todde, d. 1585, set in the stone sill of the south west chancel window.
The last photograph is of a beautiful brass to Margaret Cheyne, d.1419, set in the chancel floor.

Shown first in the gallery above is the doorway to stairs leading to the rood loft and dating to c1450 before rood lofts and screens were removed at the Reformation.
The second picture is of the south-east chancel window which depicts St Peter to whom the church is dedicated. It commemorates Edmund  Meade-Waldo who lived at Hever Castle and died in 1858.
The third photograph is of a large 16th century painting which hangs on the north wall of the nave. It is from the school of Tintoretto and depicts the Angel of the Resurrection.
Next shown is the font which has a 14th century octagonal bowl on a late 19th century stem. The surrounding floor tiles have been re-laid, but date to the 14th or 15th century.
The last photograph shows the pulpit which dates from 1621. The base and top-rail are 19th century, and the tester (canopy) is 17th century.