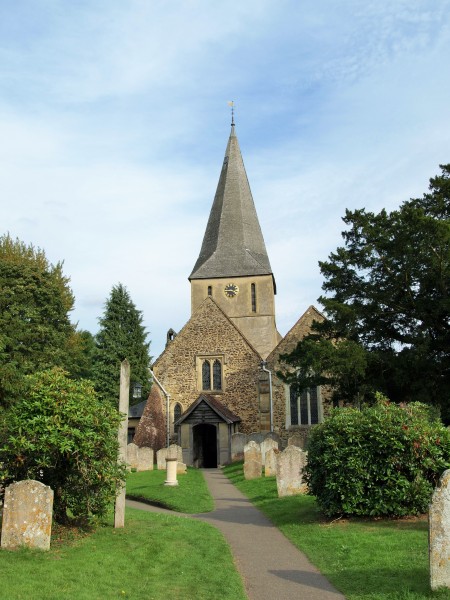 The Church of St James

This lovely church was built c1190 when it replaced the Saxon church recorded in the Domesday survey of 1086. Nothing of the Saxon building remains, but the original nave, tower and chancel, in Transitional Early English style, survive and are considered to be fine examples of the architecture of this period.
The main picture above shows St James’s from the west.
The church building is a conglomerate of materials, much of which was sourced locally. The walls are a mixture of Bargate stone, a hard sandstone/ironstone from south-west Surrey, and other ironstone rubble. There are also flints and chalk from the North Downs, and Caen stone imported from Normandy. Horsham stone slates cover part of the roof. Re-used Roman bricks can be seen above the window arch just to the north of the porch. The north-west buttress is built with Tudor bricks.
The first picture in the gallery shows the square font which dates from c1200 and has a thick central stem, four corner shafts with foliate capitals and scallop carvings on the sides of the bowl. It is made of Purbeck marble, a limestone quarried on the Isle of Purbeck in Dorset.
Next is a picture of the 14th century piscina, and the third photograph shows the oak Crusader Alms Chest which dates from c1200 and was originally used to collect money for the Holy Land wars. It was later fitted with the traditional three locks.
The first photograph is of a 2 inch high carved statuette, dating from c1300, of the Madonna and Child. It was recovered in 1886 by a lady on nearby Juniper Hill where it was dug up by her dog. It is thought to be an ornament from either a crozier or a pilgrim’s staff.
The next three photographs relate to the Anchoress of Shere*. First shown is the outline of the Anchoress cell on the outside of the church, followed by a quatrefoil and squint serving the cell, shown from the inside.
The fifth picture is of a floor brass to John, Lord Audley (died 1491), and the last photograph shows a 15th century brass to the wife of John Redford.
*The Anchoress of Shere
In 1329, Christine Carpenter, daughter of local resident, William the Carpenter, applied to the Bishop of Winchester  for permission to be enclosed in a small cell at St James’ Church, as an act of religious piety. The Bishop duly granted her wish, and Christine was locked in a cell attached to the north wall of the church with only a squint window through the church wall. After three years the anchoress left the cell and returned to the world. The reason for breaking her vows is not known, but she soon reversed this decision and re-applied to the Bishop to be returned to the cell. Her wish was again granted, this time, however, with the condition that she serve a penance failing which she would be excommunicated. Unfortunately no details of the rest of her life are known.
.