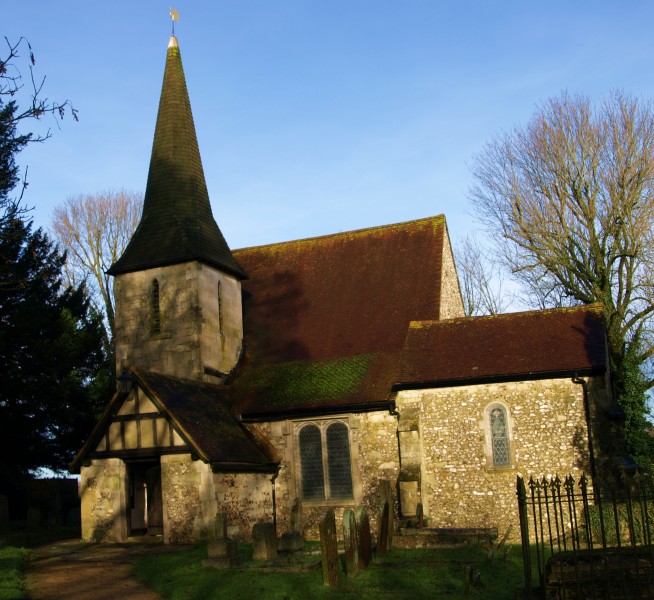 Set on high ground near the southern end of the Farthing Downs, the present Church of StPeter and St Paul, Chaldon dates from the late 10th or early 11th century, although an earlier church, probably of timber construction is recorded in a charter dated 727 AD.
The nave is of typically Saxon proportions, and the west wall, built traditionally of flint rubble, is original. At the other end of the nave, the chancel arch wall is also possibly Saxon.
The chancel of St Peter and St Paul is shown in the first picture below. The east window is Gothic Decorated and was re-glazed in 1869. The three stained glass sections depict the Nativity, Crucifixion and Ascension. To the left (north) of the altar is an Easter sepulchre recess, and next to this a Renaissance wall tablet made of local Merstham stone, dated 1562.
By far the most impressive item in the church is the wall painting which covers a large section of the west wall. Dating from c1170, this famous mural is the earliest known English wall painting, and is without equal in Europe, possibly in the whole Christian world.
‘The Ladder of Salvation of the Human Soul’ and ‘Purgatory and Hell’, is considered in detail below.
To make the Chaldon Ladder easier to describe, it is shown below divided into four, starting at the lower quadrant to the left of the ladder,  ‘reading’ across below the central band, and then repeating this from the left above the centre.
The lower half of the mural represents Hell where the Seven Deadly Sins are punished.
Far left, below a large devil’s arm, are three naked souls, walking leisurely over a beast lying on its back and biting at their feet. This represents the first of the Sins, Sloth. Next is a cauldron with souls being tortured. One soul is seen falling into the caldron, while another to the right of the caldron is holding a bottle of wine, and represents Gluttony. The third sin, Pride, is next to be depicted by the two small figures at the bottom between the large devils. On the right of the two is a woman with her hand being gripped by the small devil. This is assumed to show that the devil is indicating the woman’s pride in a ring she is wearing. Immediately above these two are two more figures, apparently fighting over possession of an indistinct object, and therefore representing the fourth sin, Anger. At the centre of the lower half, the Ladder of Souls is
shown with souls trying, unsuccessfully to climb up.
Above, the fifth sin, Lust, is next represented by a man and woman embracing, but being constrained by a devil. Then comes a depiction of a man sitting astride a fire, with a money pouch hanging around his neck. He is being forced by two devils to count coins pouring from his mouth, this depicting Avarice. Finally, to the right of this, and representing the seventh sin, Envy, are two souls, one appearing to be envious of the other’s youth. The last item on the lower half is the ‘source of all evil’, the Tree of the Knowledge of Good and Evil, with a serpent in its upper branches.
Above the central band of the mural are happier scenes with souls progressing up the Purgatory Ladder towards Heaven.

The far left of the painting is damaged here, but the scene is clearly that of St Michael weighing souls, a theme often encountered in other wall paintings and in stained glass. A large devil can be seen trying to weigh down one side of the scales as a soul climbs onto the other side. To the right of St Michael are three saved souls being shown to the upper part of the Ladder by another angel. These are perhaps meant to represent the three Marys who visited the tomb of Jesus, named in the gospel of Mark as Mary Magdalene, Mary Mother of Jesus and Mary Salome. Above these another angel is flying with a saved soul in her arms.

The lower section of the top right quadrant depicts the Harrowing of Hell. A large devil lies with arms bound, on top of a giant ‘worm’, and is held down by Christ with a vexillum (Roman banner staff) whilst the creature attacks the devil with its beak. A line of redeemed souls are escaping from the flames of hell and are walking up towards Christ’s outstretched hand. Two more angels, one flying and the other standing by the Ladder, are both depicted with scrolls, to welcome the saved souls.