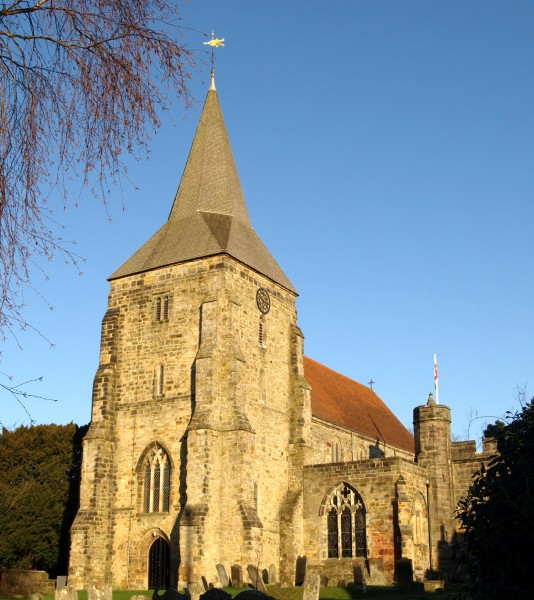 The Church of St Dunstan

Initially built of logs from the Weald forests, a church at Mayfield was founded by St Dunstan, Archbishop of Canterbury 960-978 AD. During the 12th century, the Normans rebuilt the wooden church in stone. Much of this structure was destroyed by fire in 1389, leaving only the tower and some stonework at the west end of the north aisle, which is now the oldest extant part of the church.
A lancet window in the 12th century wall of the north aisle is shown in the gallery. The stained glass was fitted in 1907 and is a copy of an ancient drawing of St Dunstan held in the British Museum.

The font consists of an octagonal bowl dated 1666, on an earlier octagonal stem, probably from the 15th century.

St Dunstan was a Benedictine monk who not only became Archbishop of Canterbury in 960 AD, but was also a poet, teacher, musician, skilled metal worker, and advisor to the kings of Wessex. It was his capacity as a metal worker that provided the background to two of the Legends of Saint Dunstan. The one most recounted is of his first meeting with the Devil, who came to St Dunstan’s forge disguised as a beautiful woman. However, St Dunstan spotted the cloven hooves beneath the woman’s dress, and grabbed the Devil’s nose with his red hot tongs. The Devil escaped by leaping in one bound as far as Tunbridge Wells, where he plunged his burnt nose into the spring and thus gave that town the iron-rich chalybeate waters which it still retains today.
A second legend tells of the devil revisiting St Dunstan, disguised this time as a weary traveller in need of a horseshoe. Once again St Dunstan saw through the disguise and beat the devil until he pleaded for mercy, and agreed never to enter any house with a horseshoe above the door.

The interior at St Dunstans is one of the most interesting and attractive in the diocese. The second photograph in the first gallery  was taken at Christmas looking towards the chancel from the nave. In the foreground is a nativity scene, and above is one of two large brass chandeliers, this one dated 1737. The chandeliers were used at this time to light the nave at funerals, traditionally held during evenings by ‘well to do’ families, such as the local ironmasters. Before conversion to electric operation, the chandeliers were lowered for lighting the candles by a weighted pulley system.
The four light perpendicular east window was glazed with ‘Munich’ stained glass in 1869, and then re-glazed in 1912 by Mayer with a depiction of ‘Christ the Consoler’.